I want to be the only hand you ever need to hold.

“Once I had her hand, I never wanted to let go of her.” — Ottilie Weber

“His hand glides down my arm, folds over my hand. His fingers lace with mine, palms kissing. I can feel the fast thud of his heart through this single touch.” — Sophie Jordan

“Listen to ‘the sound of one hand clapping’ the next time you see a couple united in wisdom and love walking hand in hand.” — Ellen and Charles Birx 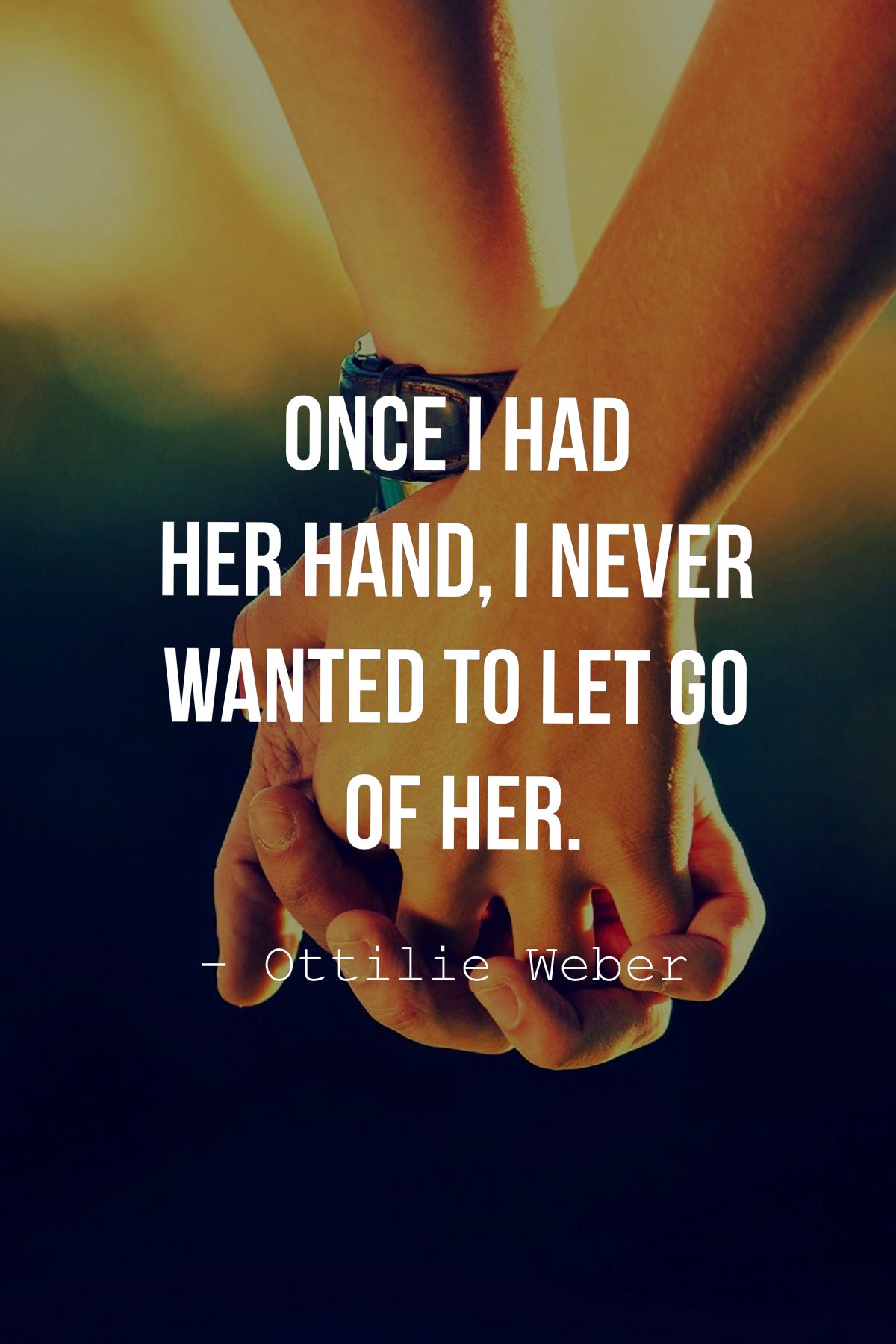 there will always be room for your hand in mine.

for all the things my hands have held the best by far is you.

“Sometimes, reaching out and taking someone’s hand is the beginning of a journey. At other times, it is allowing another to take yours.” — Vera Nazarian 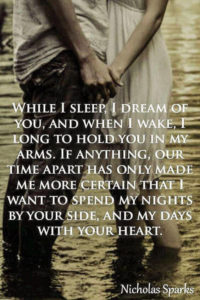 holding on is tough much tougher than letting go or simply quitting.

Hugging or holding hands with the person you love has been proven to reduce stress almost instantly.

“It’s not that we have to quit this life one day, but it’s how many things we have to quit all at once: music, laughter, the physics of falling leaves, automobiles, holding hands, the scent of rain, the concept of subway trains… if only one could leave this life slowly!” — Roman Payne, Rooftop Soliloquy

I understand, why people hold hands. I’d always thought it was about possessiveness, saying “This is mine”. But it’s about maintaining contact. It’s about speaking without words. It’s about “I want you with me” and “don’t go”. 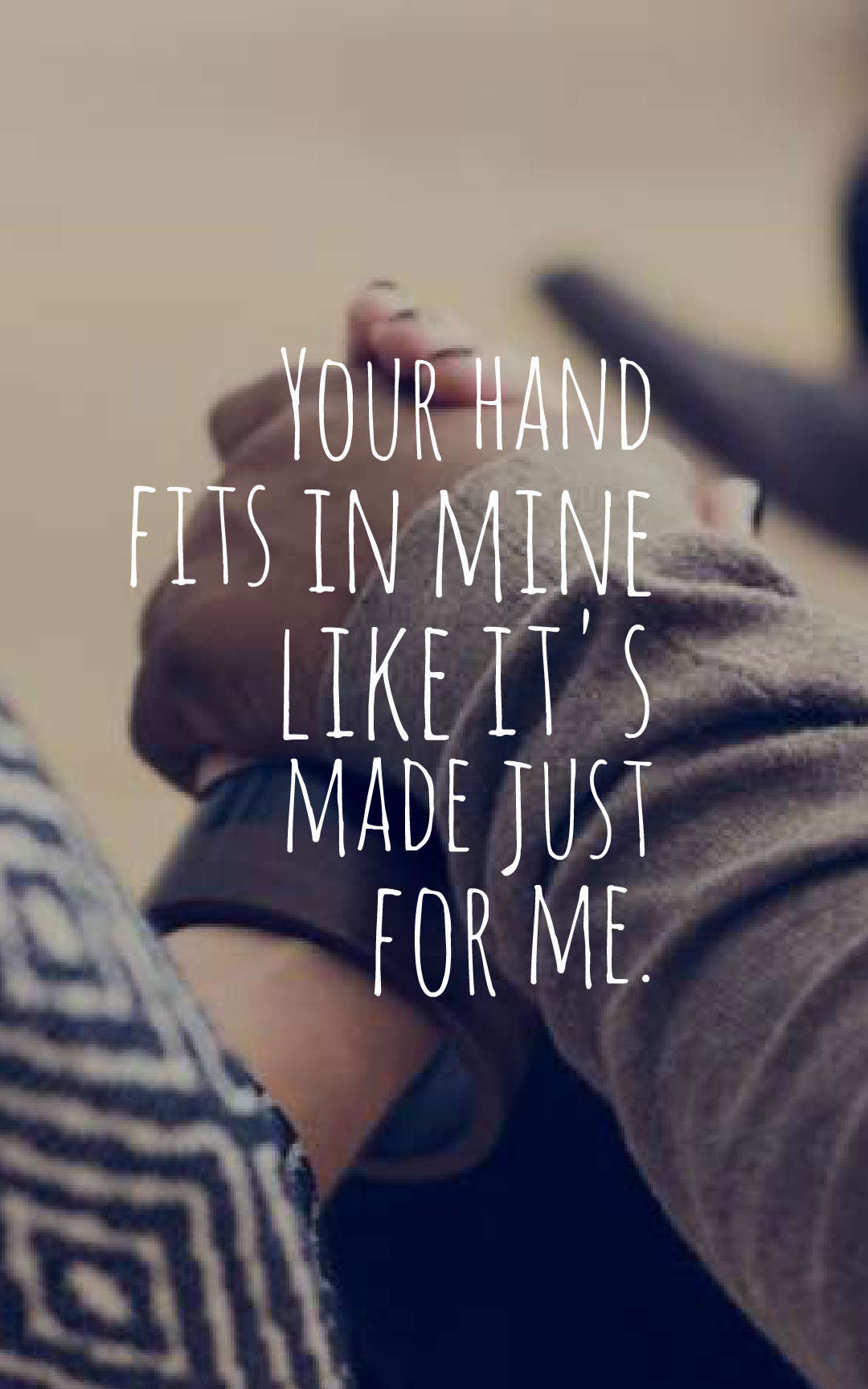 “Holding hands in love is underrated, while sex is overrated. Don’t you think so?” — Kiran Joshi

Holding hands with you is like a promise that, if even for a brief moment or a few hours, we don’t have to face the world alone.

And my hear’s at home when my hand is holding yours. 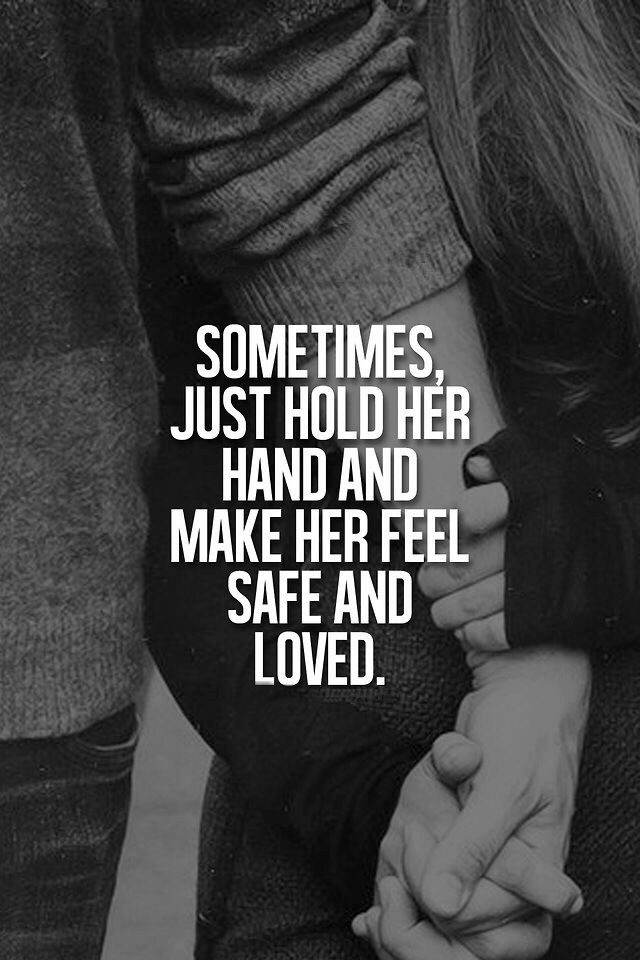 “Ah, what happiness it is to be with people who are all happy, to press hands, press cheeks, smile into eyes.” — Katherine Mansfield

“Nothing in this world compares to the comfort and security of having someone just hold your hand.” — Richelle E. Goodrich

“I could conquer the world with one hand as long as your holding the other.” — Megan Smith 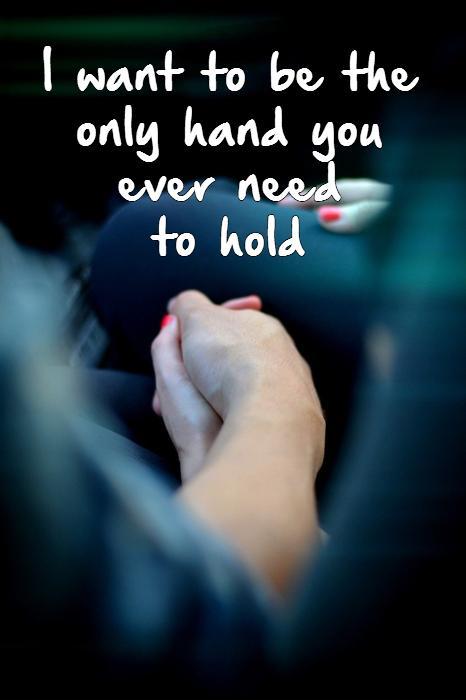 Whenever you’re lonely. Just look at the spaces between your fingers and remember that’s where my fingers fit perfectly.

Hold my hand and I’ll take you there. Somehow, Some day, Somewhere! 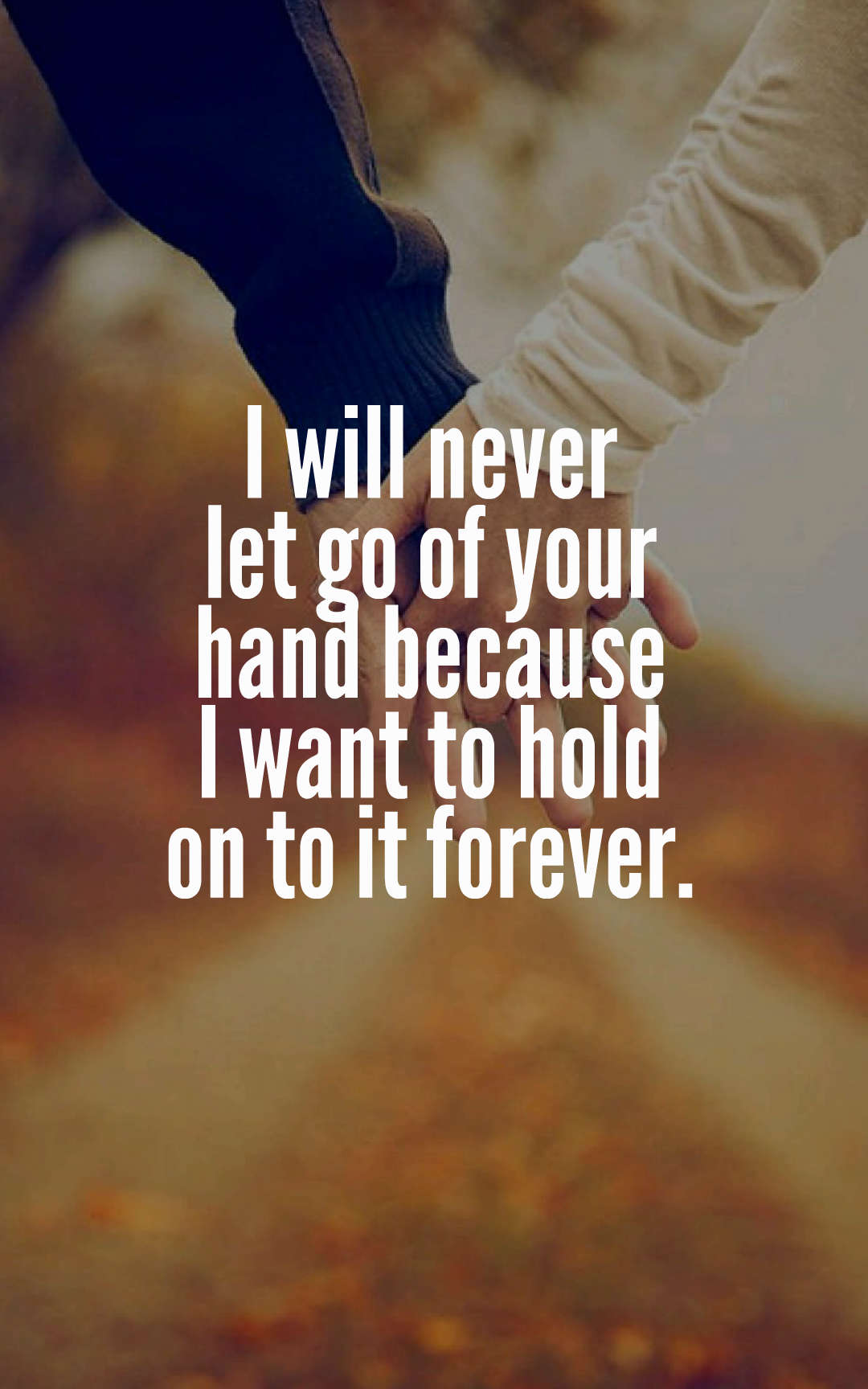 “Holding her hand in public is just another way of saying you’re proud to have her.” — Drake

Your hand fits in mine like it’s made just for me.

being with you is like having every single of my wishes come true. 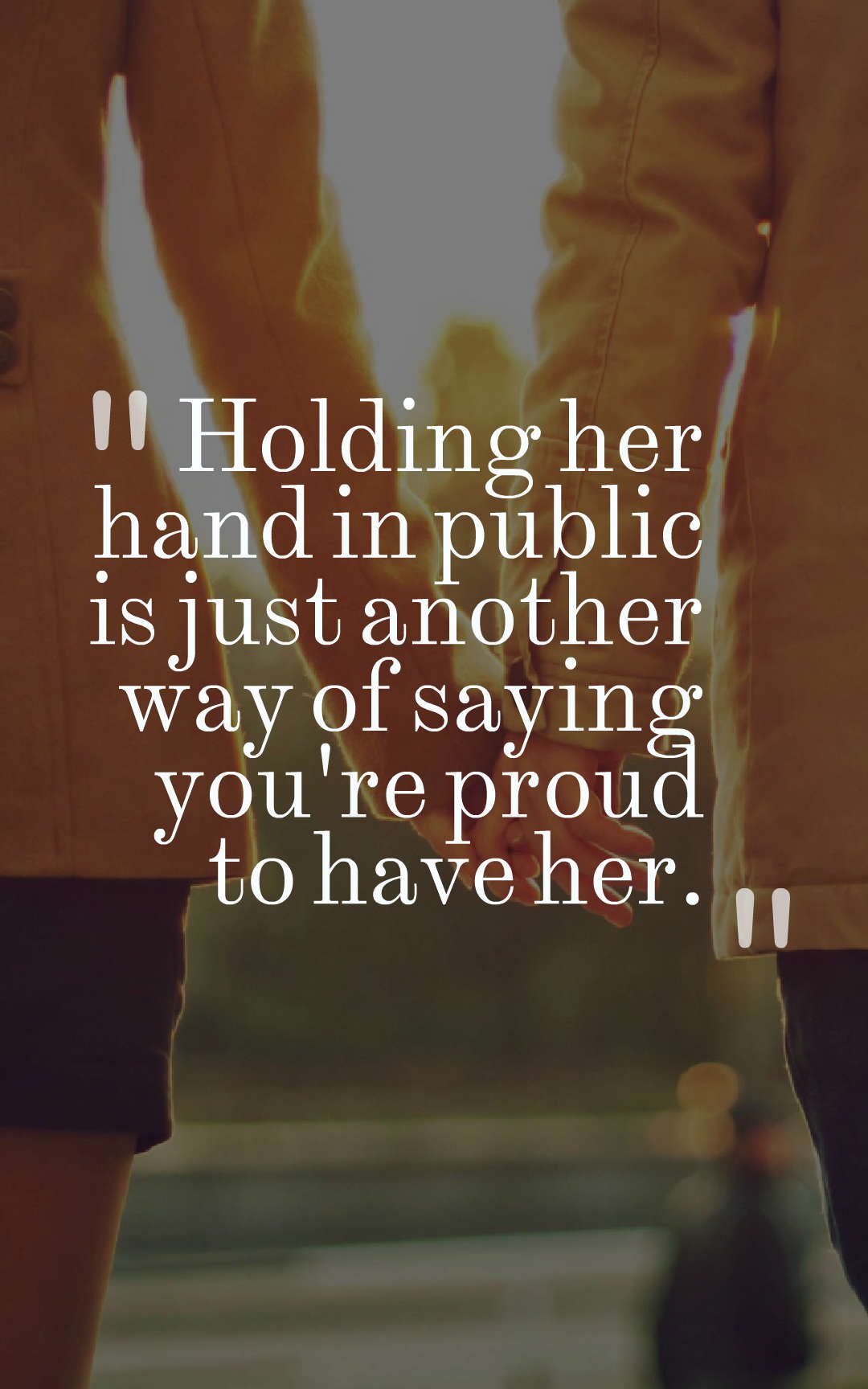 After a while you learn the subtle difference. Between holding a hand and chaining a soul,

You know it’s love when you want to keep holding hands even after you’re sweaty.

Holding hands is a promise to one another that for just a moment, the two of you don’t have to face the world alone. 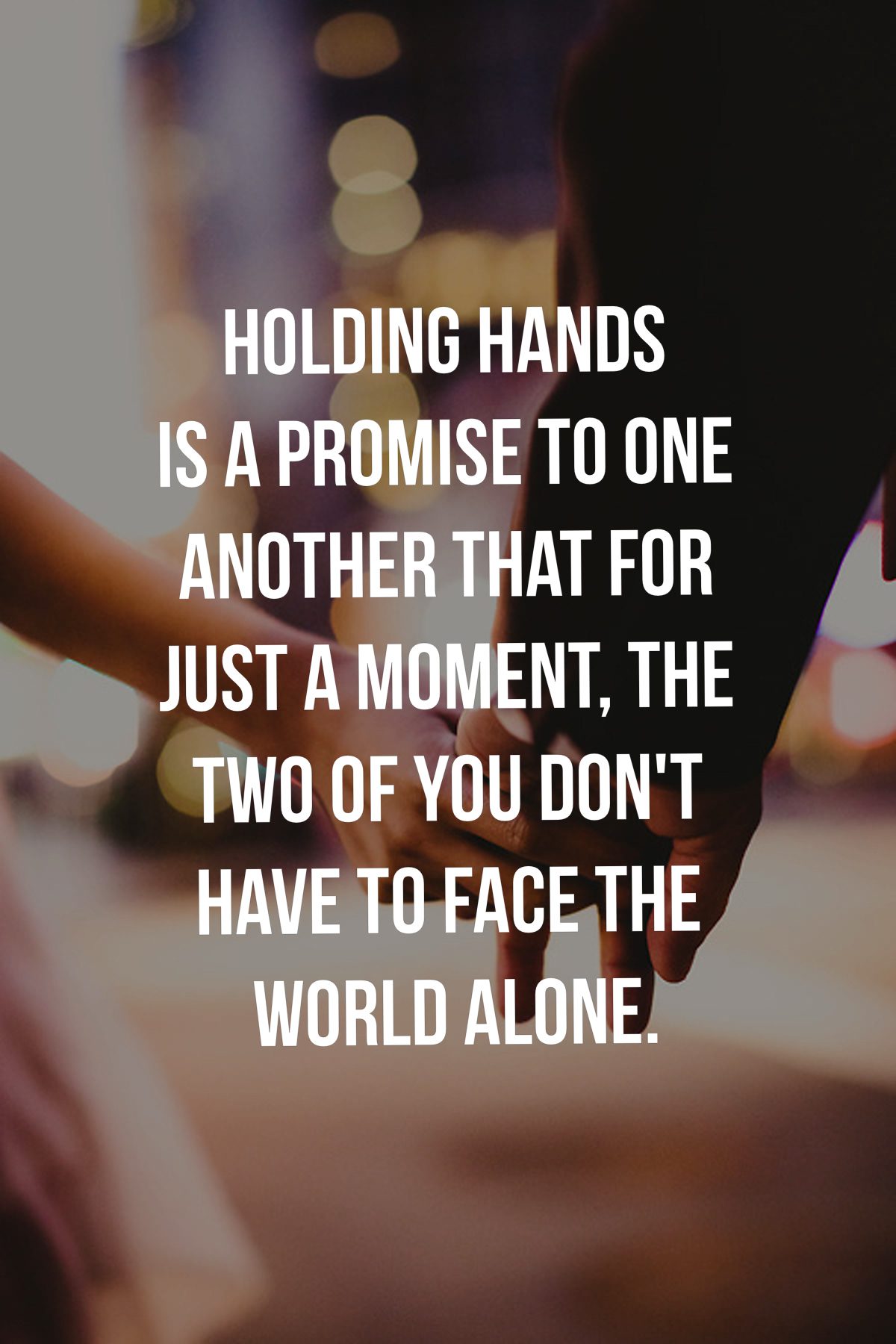 there’s something so real about holding hands, some kind of complex simplicity, saying so much by doing so little. i love it.

Sometimes all a person needs is, a hand to hold and a heart to understand.

I just want to hold your hand and wander the streets with you. 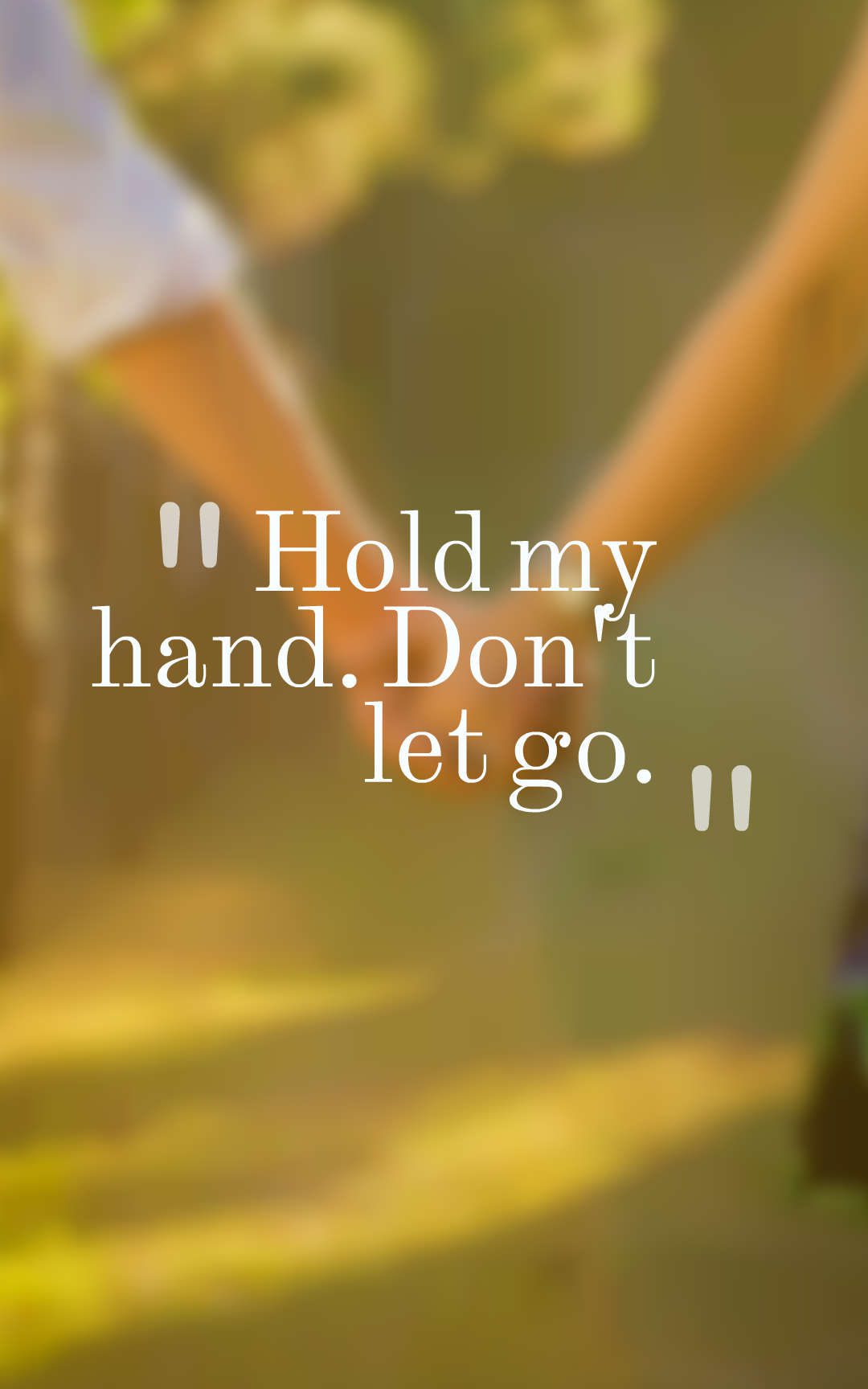 I will never let go of your hand because I want to hold on to it forever. I will love you today and always.

Hold my hand and I’ll go anywhere with you.

“And it is still true, no matter how old you are, when you go out into the world it is best to hold hands and stick together.” — Robert Fulghum 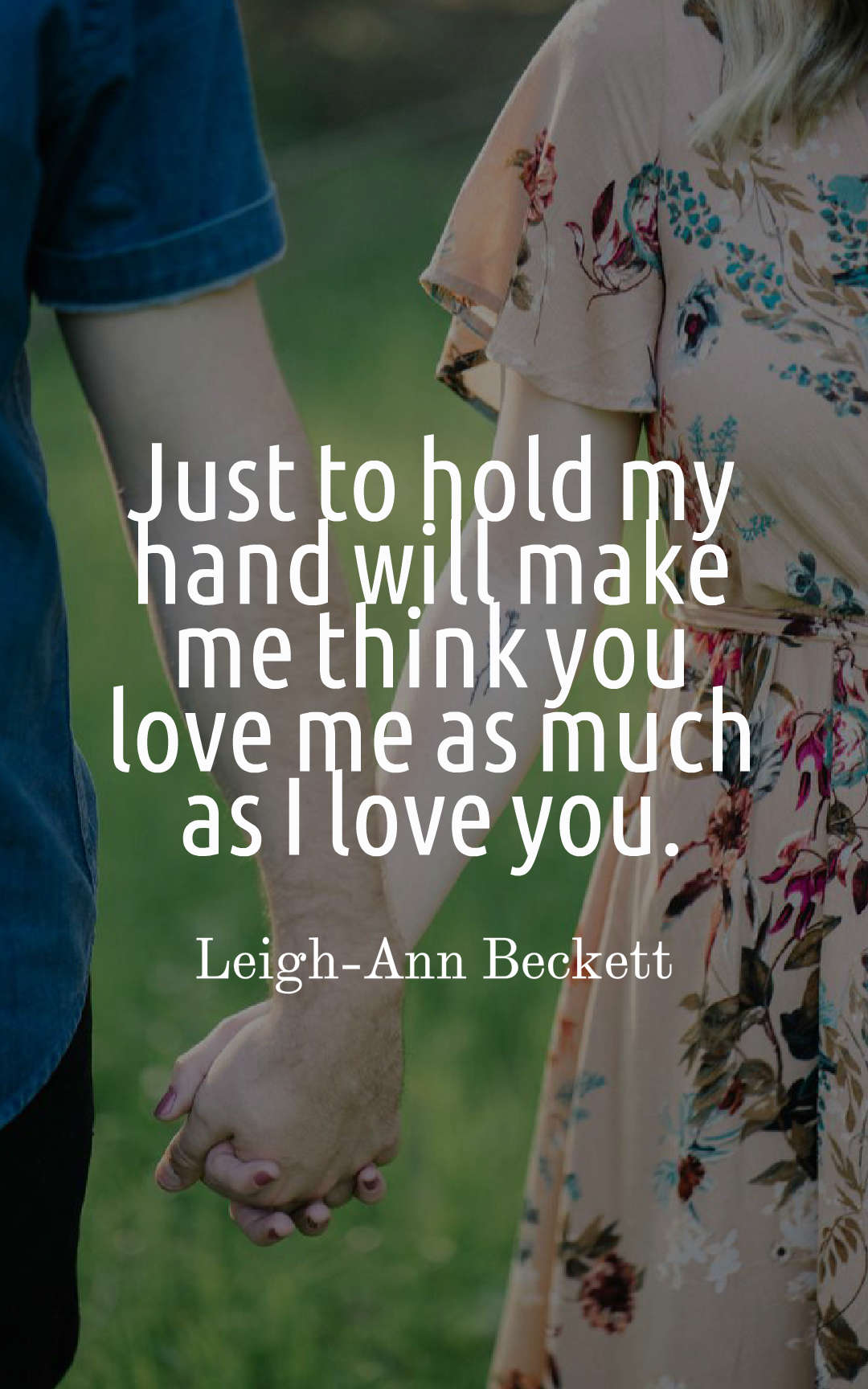 “Remember, we all stumble, every one of us. That’s why it’s a comfort to go hand in hand.” — Emily Kimbrough

When traveling life’s journey it’s good to have a friend’s hand to hold on to. 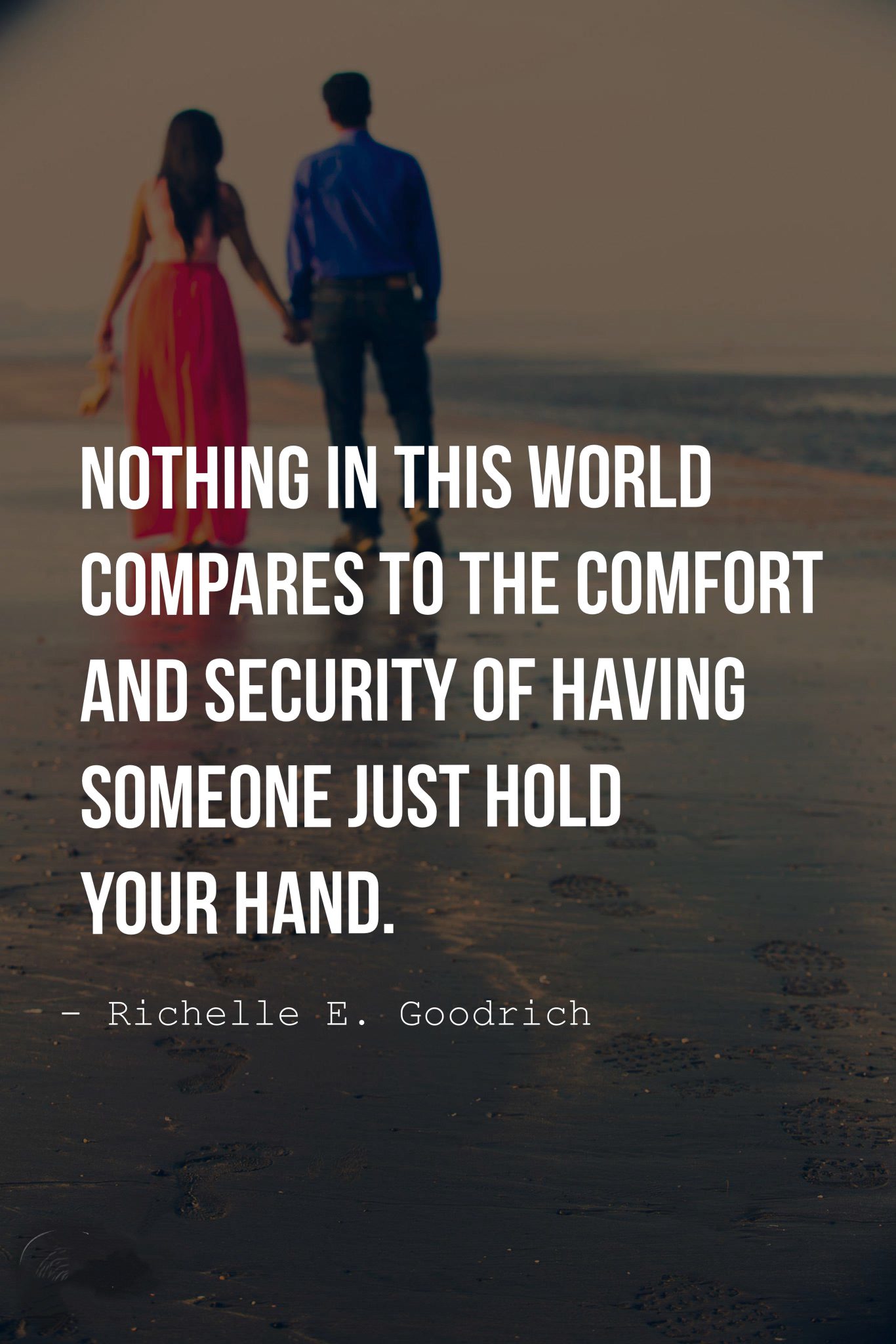 “Just to hold my hand will make me think you love me as much as I love you.” — Leigh-Ann Beckett

Holding someone’s hands is like giving a promise that the two of you will never have to face the world alone.

A Relationship Is Not Holding Hands While You Understand Each Other, It’s About Having Lots Of Misunderstandings & Still Not Leaving Each Other’s Hands.

I am a strong person but every now and then I need someone to hold my hand and tell me everything will be alright.

Hopefully you will enjoy these beautiful and lovely collection of romantic Holding Hands quotes and sayings. please don’t forget to share these quotes.

There is nothing impossible when I am holding your hand

“You hold her hand and she holds yours, and that’s a very good sign that she’s your tootsey wootsey in the good old sumer time.” — Ron Shields

“I could conquer the world with one hand as long as your’e holding the other.” — Lauren Alaina

“And he understands. He understands why people hold hands: he’d always thought it was about possessiveness, saying This is mine. But it’s about maintaining contact. It is about speaking without words. It is about I want you with me and don’t go.” — Cassandra Clare

“Relationship is not just holding hands while you understand each other. It’s also having lots of misunderstandings and still not leaving each other’s hands.” — Ryan Ferreras

“We hold hands as we walk through town. If anybody notices, nobody cares. I know we all like to think of the heart as the center of the body but at this moment, every conscious part of me is in the hand that he holds. It is through that hand, that feeling, that I experience everything else.” — David Levithan

“Nothing, I learned, brings you into the present quite like holding hands. The past seemed irrelevant; the future, unnecessary.” — Catherine Lowell

“I will remember the feel of his hand around mine for the rest of my life.” — Meg Leder

“They were not holding hands, but their shadows were.” — Toni Morrison

“One of my favorite things in the world is to be seeing two people that are really old, still holding hands, still kissing.” — Tommy Lee

“Expressions of affection, like putting your arm around someone’s shoulder, holding hands, or giving a kiss good night, involve the principle of honesty.” — John Bytheway

“Social mores change all the time. In the mid-1970s, it would’ve been astonishing, say, to see two men holding hands in the streets. And the attitude to having a fling with a girl, or whatever, was quite different then.” — Robert Harris

“You can get too close as a team. You need time away from each other. You change in the same dressing room, you play on the same cricket field, you stay in the same hotel, you travel in the same planes and buses. C’mon – this business of everyone holding hands and being pally is nonsense.” — Glenn Turner

“I get the greatest feeling when I’m singing. It’s other-worldly. Your feet are anchored into the Earth and into this energy force that comes up through your feet and goes up the top of your head and maybe you’re holding hands with the angels or the stars, I have no idea.” — Cyndi Lauper

“Why is it that, as a culture, we are more comfortable seeing two men holding guns than holding hands?” — Ernest Gaines

“I spent some time in Cairo, and you see these Coptic Christians and Muslims holding hands. They got a rich history together of working together and cohabitating. You couldn’t pay to see that in America.” — Lecrae

“When you’re 17 in the suburbs and know only three gay people, holding hands with your girlfriend is a proclamation.” — Mary Lambert

“Trying to launch a career as an artist is like trying to run through a crowd holding hands with five people. It’s so difficult.” — LP

“I didn’t do the marching down the streets, jumping in front of the lines and holding hands… that wasn’t me.” — Solomon Burke

“Today I promise to hold your hand, cradle your heart, and lead you down a path of all that is good and true in this world.” — Lori Eberhardy

“You can get too close as a team. You need time away from each other. You change in the same dressing room, you play on the same cricket field, you stay in the same hotel, you travel in the same planes and buses. C’mon – this business of everyone holding hands and being pally is nonsense.” — Glenn Turner

“The kind of work I do, there’s usually a lot of money on the line; there are jobs on the line. It’s not a world that lends itself to everyone being friendly all the time. We’re certainly not sitting around holding hands singing ‘Kumbaya.’” — Michael Avenatti

“There were, and still are, a lot of different points of view in the gay community. It’s not everybody holding hands and singing ‘Kumbaya.’ People have very different perspectives.” — Matt Bomer

“Something that I saw in Sochi that I didn’t get the opportunity to have in Vancouver was the team holding hands with arms in the air and medals around their neck.” — Mirai Nagasu

“West Hollywood blew my mind: gay men walking down the street, kissing and holding hands. I’d never imagined there was a place like that.” — Shane McAnally

“There’s an element of tongue-in-cheek in every one of our songs. Walking off into the sunset, holding hands, and being married forever was not exactly a brand new idea.” — Peter Noone

“People thought we were intimidating, especially once we’d had a few drinks, but when I look back we were virtually on top of each other, holding hands. We sounded so stupid.” — Keren Woodward

“Miss Morstan and I stood together, and her hand was in mine. A wondrous subtle thing is love, for here were we two, who had never seen each other until that day, between whom no word or even look of affection had ever passed, and yet now in an hour of trouble our hands instinctively sought for each other. I have marveled at it since, but at the time it seemed the most natural thing that I would go out to her so, and, as she has often told me, there was in her also the instinct to turn to me for comfort and protection. So we stood hand in hand like two children, and there was peace in our hearts for all the dark things that surrounded us.” ― Arthur Conan Doyle

“He laces our fingers and shrugs. And I’m dead. I am actually dead. There’s no other way to explain it. I’m sitting in fucking Herald Square, holding hands with the cutest boy I’ve ever met, and I’m dead. I’m the deadest zombie ghost vampire who ever died. And now my mouth isn’t working. It’s like I’m stunned into silence. That never happens.” ― Becky Albertalli

“His hand lay across my stomach as he slept soundly. I entwined my fingers with his and breathed through the warmth that seeped through my chest. Such a simple, sweet thing to do, yet holding hands in bed was incredibly intimate.” ― N.R. Walker

“Her hand gripped his, and even amid the fear and danger he marveled at the feeling that came with the contact. If we die holding hands in this way, will we enter the next dream together?” ― Jack Campbell

“Gold authenticity can only be tested under maximum fire. The same holds true with regard to manhood.” ― Moutasem Algharati