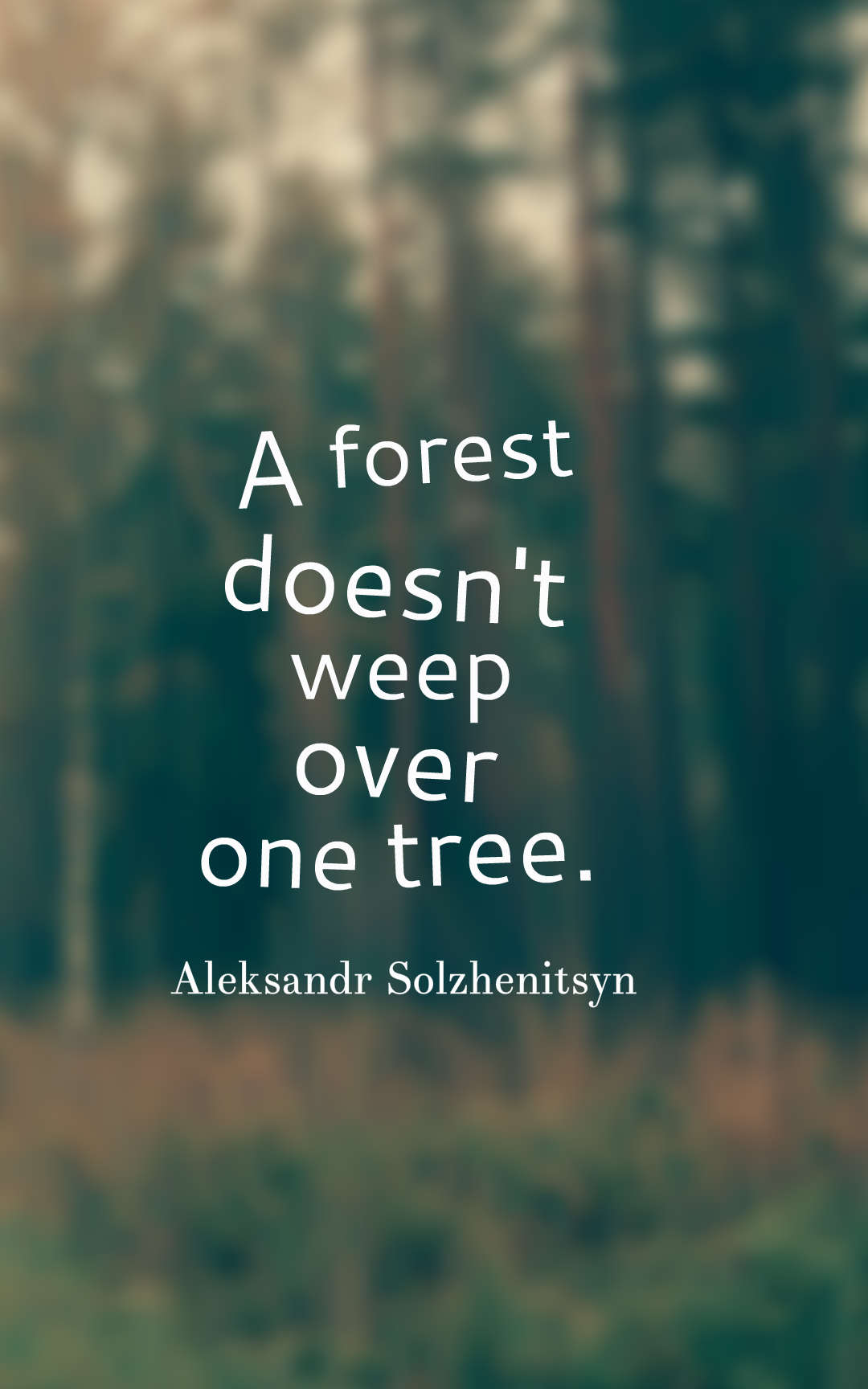 “The clearest way into the Universe is through a forest wilderness.” — John Muir

“Forests may be gorgeous but there is nothing more alive than a tree that learns how to grow in a cemetery.” — Andrea Gibson

“A forest doesn’t weep over one tree.” — Aleksandr Solzhenitsyn 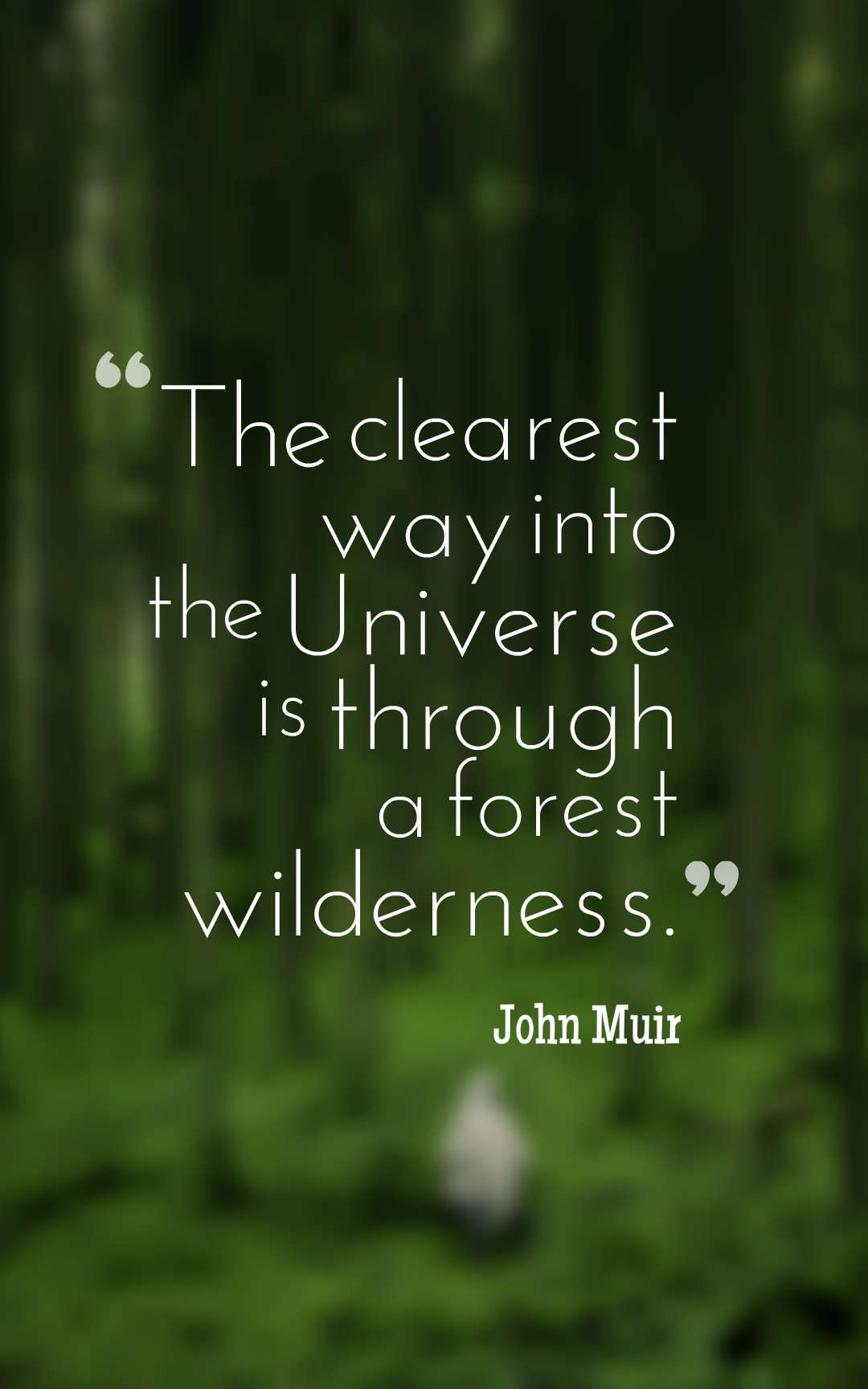 “A cold wind was blowing from the north, and it made the trees rustle like living things.” — George R.R. Martin

“The forest is a quiet place if only the best birds sing.” — Kay Johnson

“It is not so much for its beauty that the forest makes a claim upon men’s hearts, as for that subtle something, that quality of air that emanation from old trees, that so wonderfully changes and renews a weary spirit.” — Robert Louis Stevenson 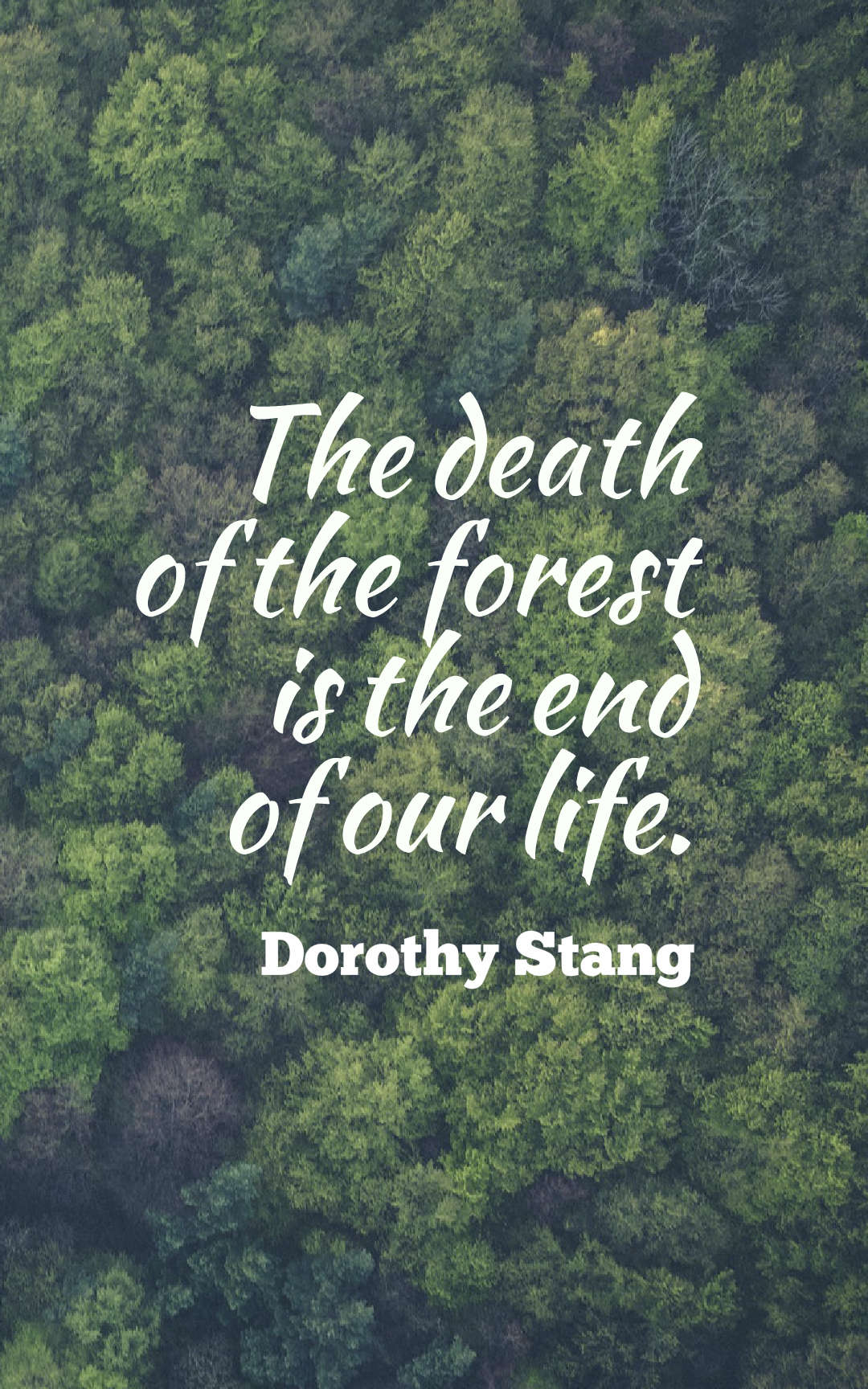 “The mountains, the forest, and the sea, render men savage; they develop the fierce, but yet do not destroy the human.” — Victor Hugo

“These woods are where silence has come to lick its wounds.” — Samantha Hunt 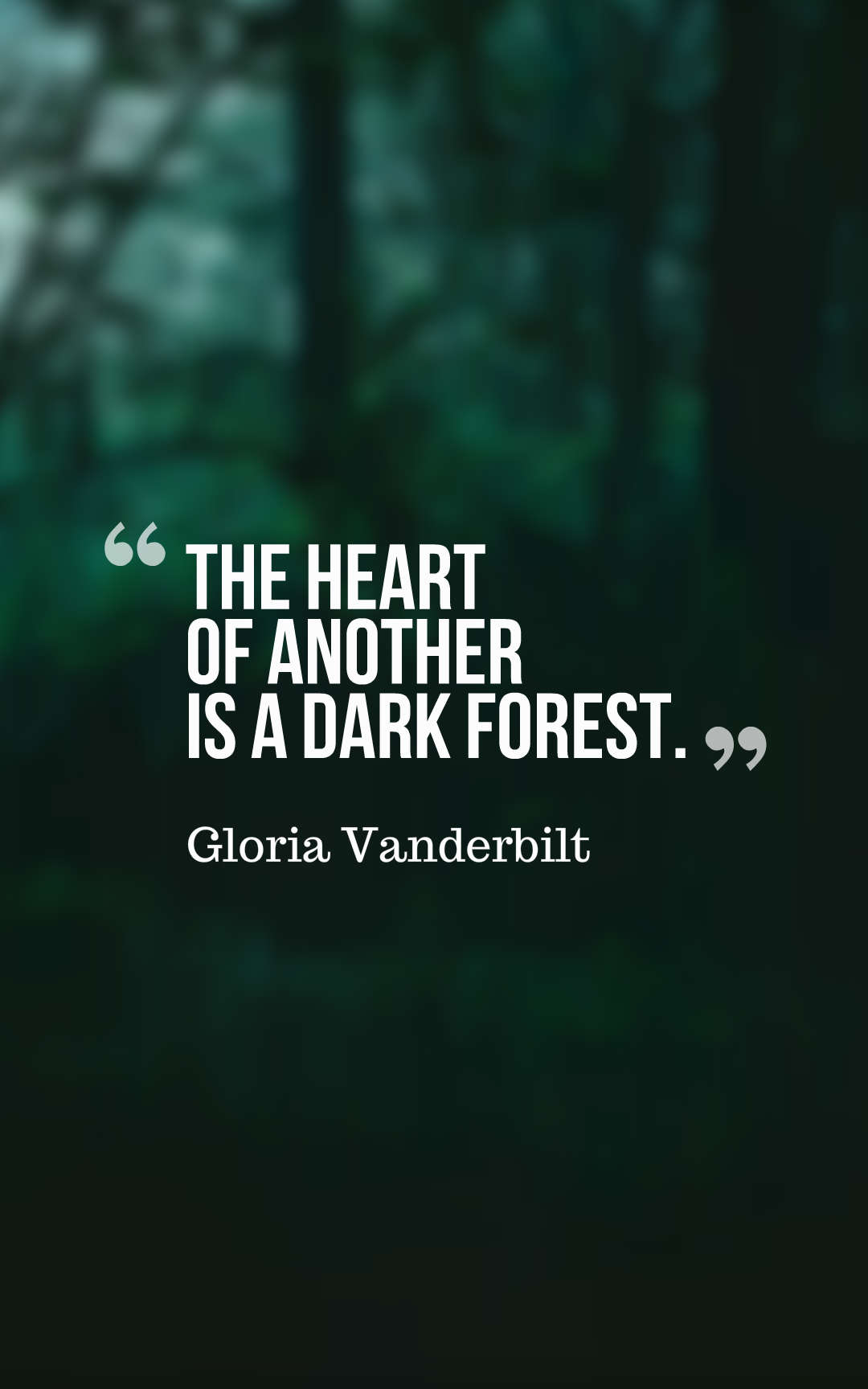 “If you love a tree you will be more beautiful than before!” — Amit Ray

“In a forest of a hundred thousand trees, no two leaves are alike. And no two journeys along the same path are alike.” — Paulo Coelho

“We all have forests on our minds. Forests unexplored, unending. Each one of us gets lost in the forest, every night, alone.” — Ursula K. Le Guin 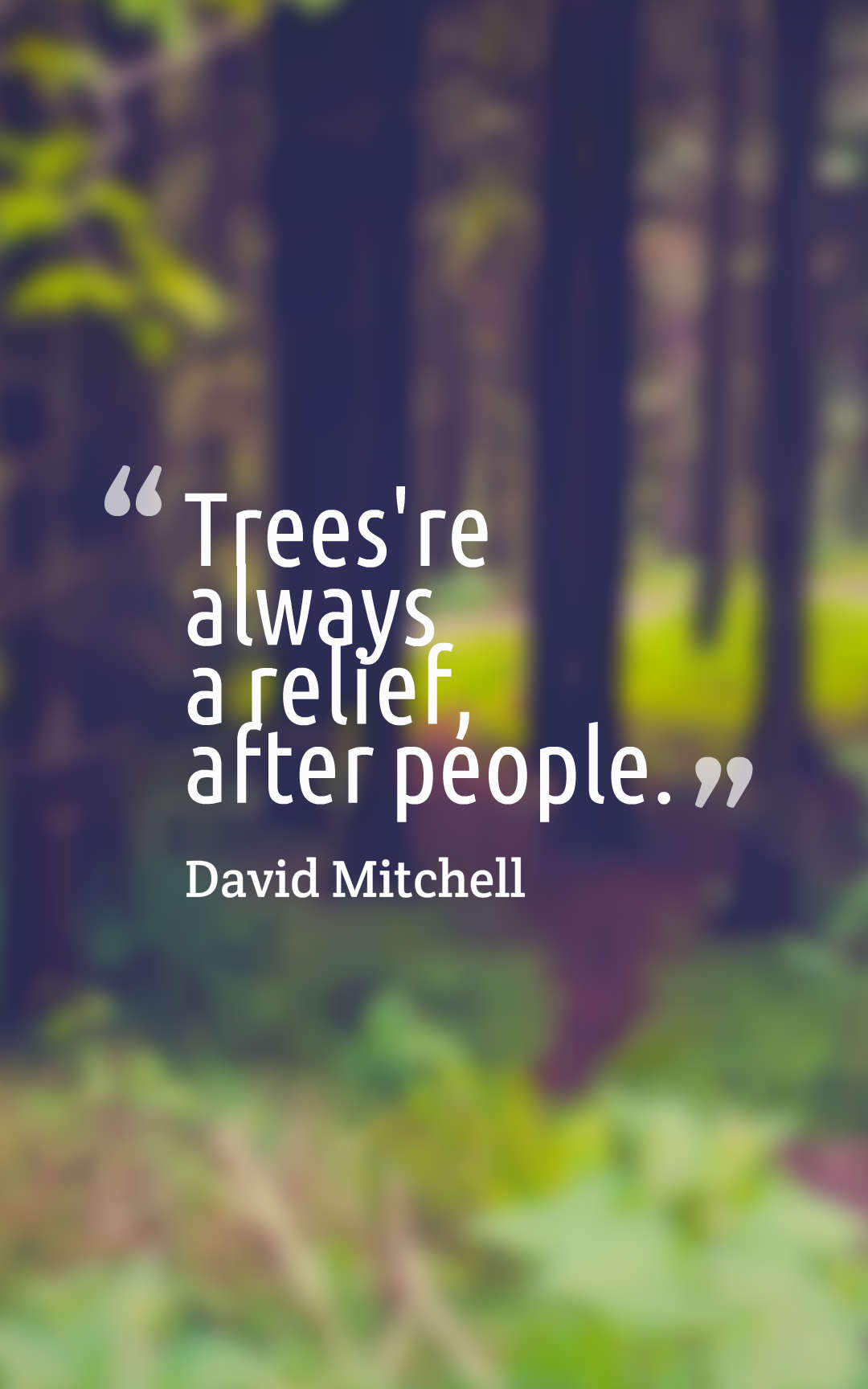 “This forest eats itself and lives forever.” — Barbara Kingsolver

“Even if one tree falls down it wouldn’t affect the entire forest.” — Chen Shui-bian

“If you cut down a forest, it doesn’t matter how many sawmills you have if there are no more trees.” — Susan George 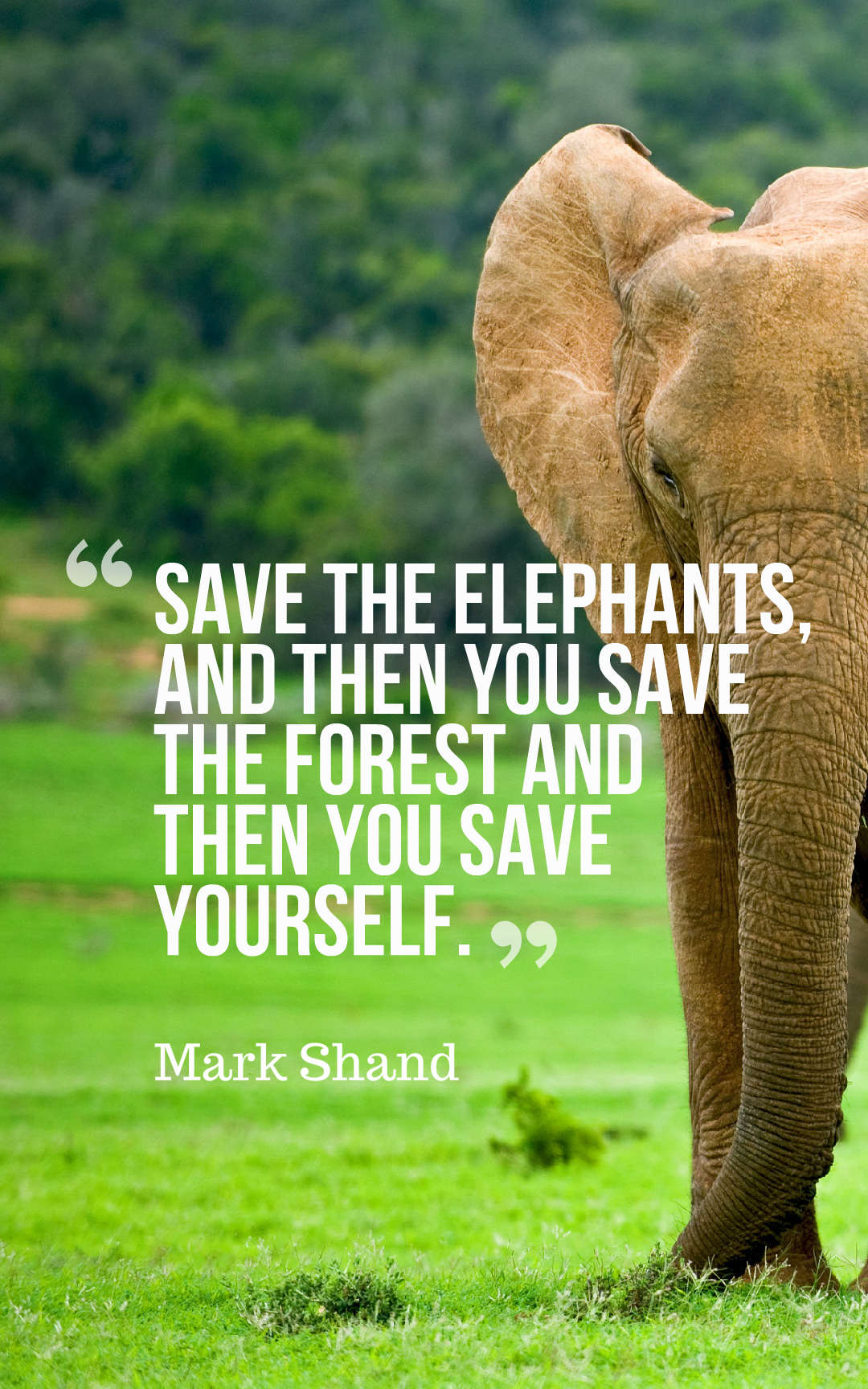 “Never go into the deep parts of the forest, for there are many dangers there, both dark and bright, and they will ensnare your soul.” — Robert Beatty

“If you go to a desert, you will hear this mysterious voice: Be wise, protect your forests!” — Mehmet Murat ildan 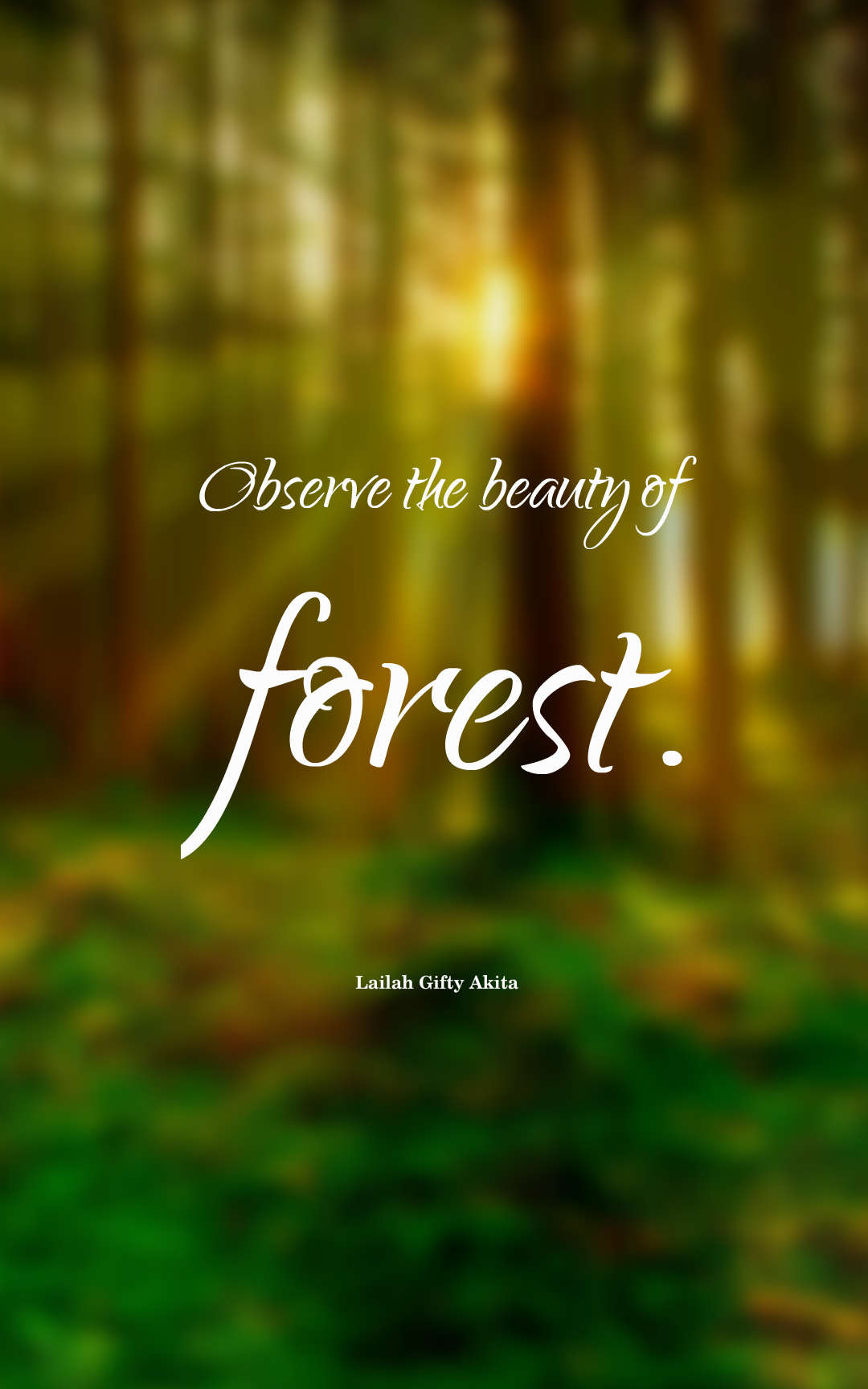 “Knowing trees, I understand the meaning of patience. Knowing grass, I can appreciate persistence.” — Hal Borland

“There is always an adventure waiting in the woods.” — Katelyn S. Bolds

“Forests are the world’s air-conditioning system—the lungs of the planet—and we are on the verge of switching it off.” — Prince Charles 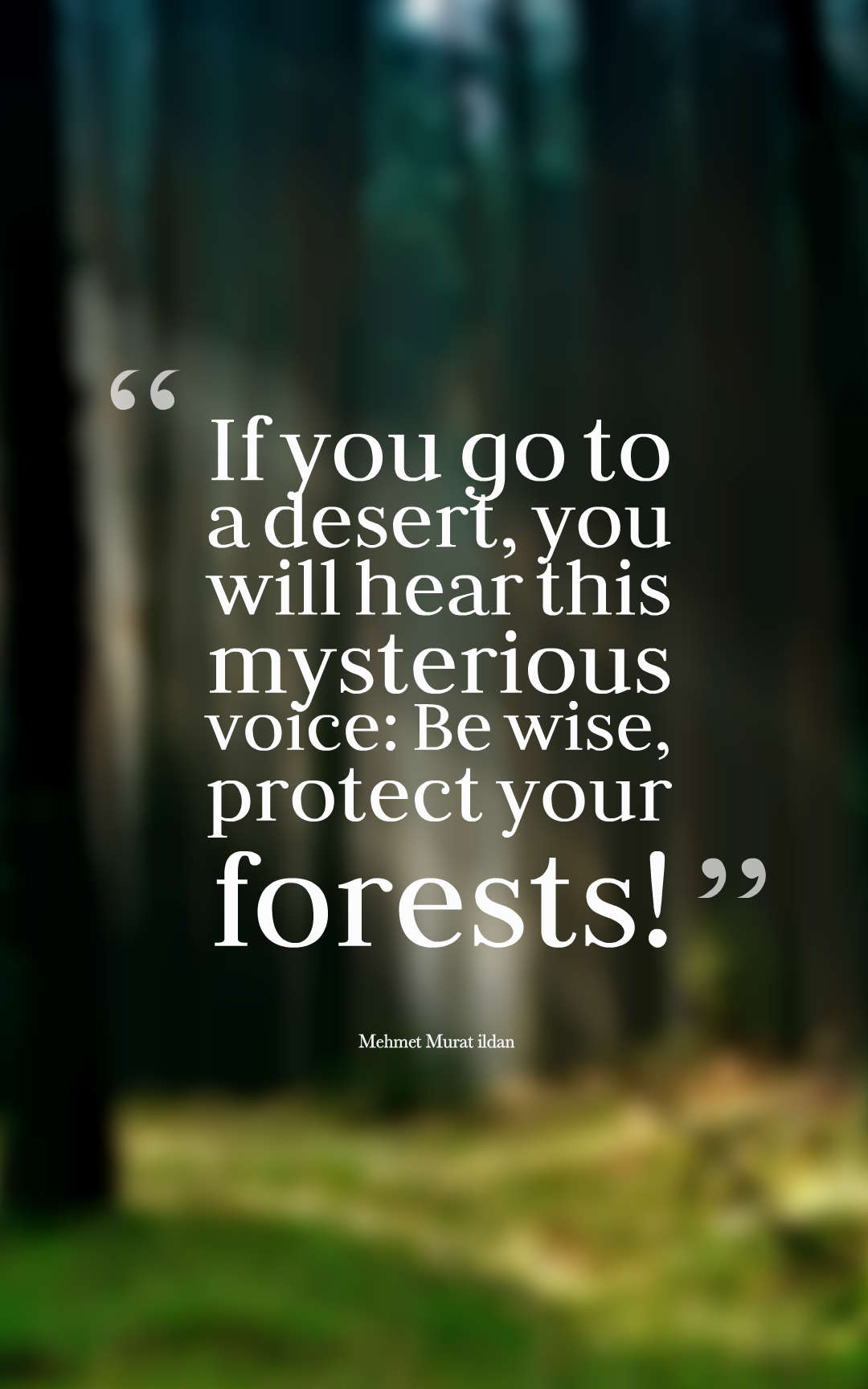 “I grew up in a forest. It’s like a room. It’s protected. Like a cathedral… it is a place between heaven and earth.” — Anselm Kiefer

“The creation of a thousand forests is in one acorn.” — Ralph Waldo Emerson

“Nothing is more beautiful than the loveliness of the woods before sunrise.” — George Washington Carver 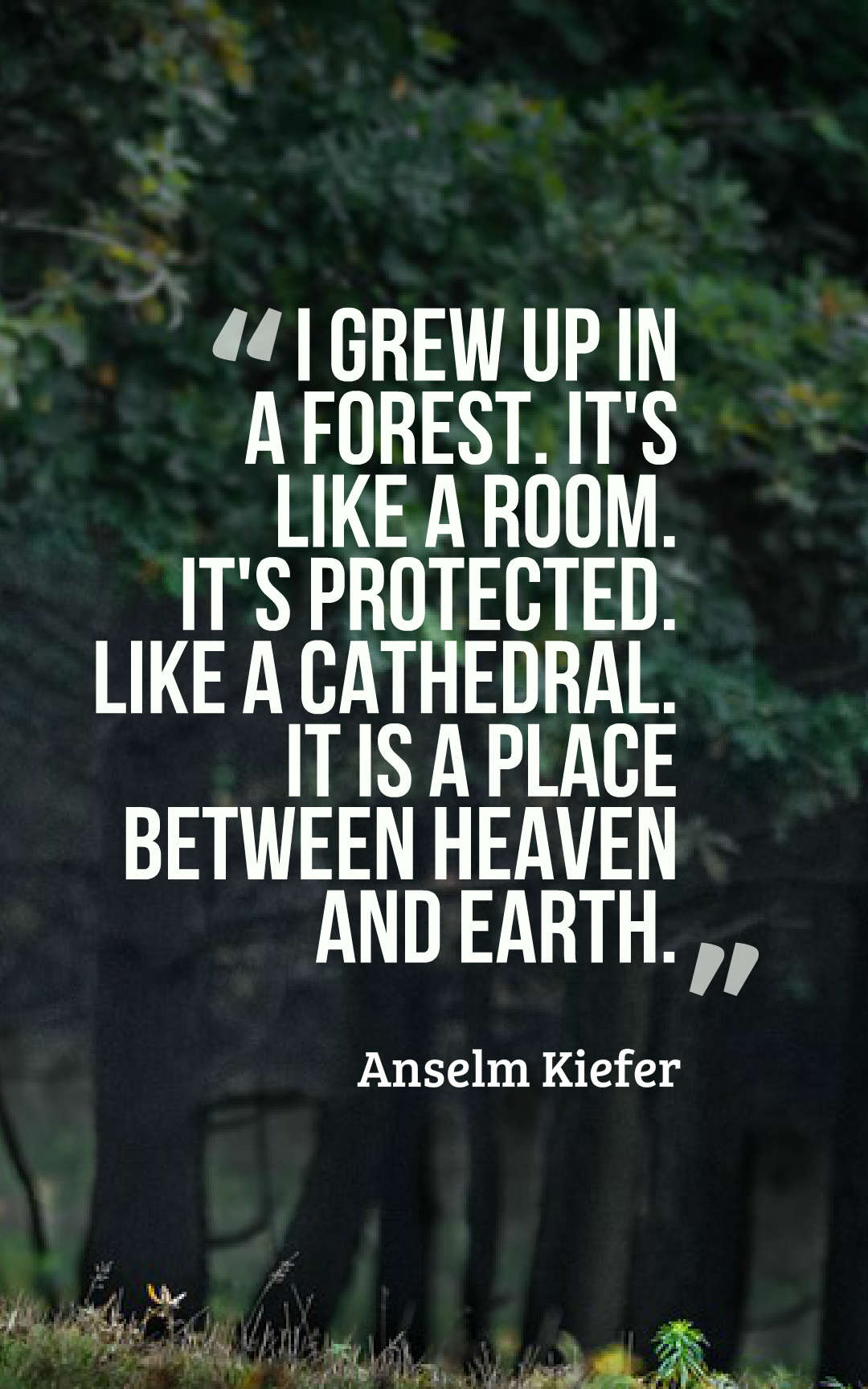 “The forest is not a resource for us, it is life itself. It is the only place for us to live.” — Evaristo Nugkuag

“All forests are one… They are all echoes of the first forest that gave birth to Mystery when the world began.” — Charles de Lint 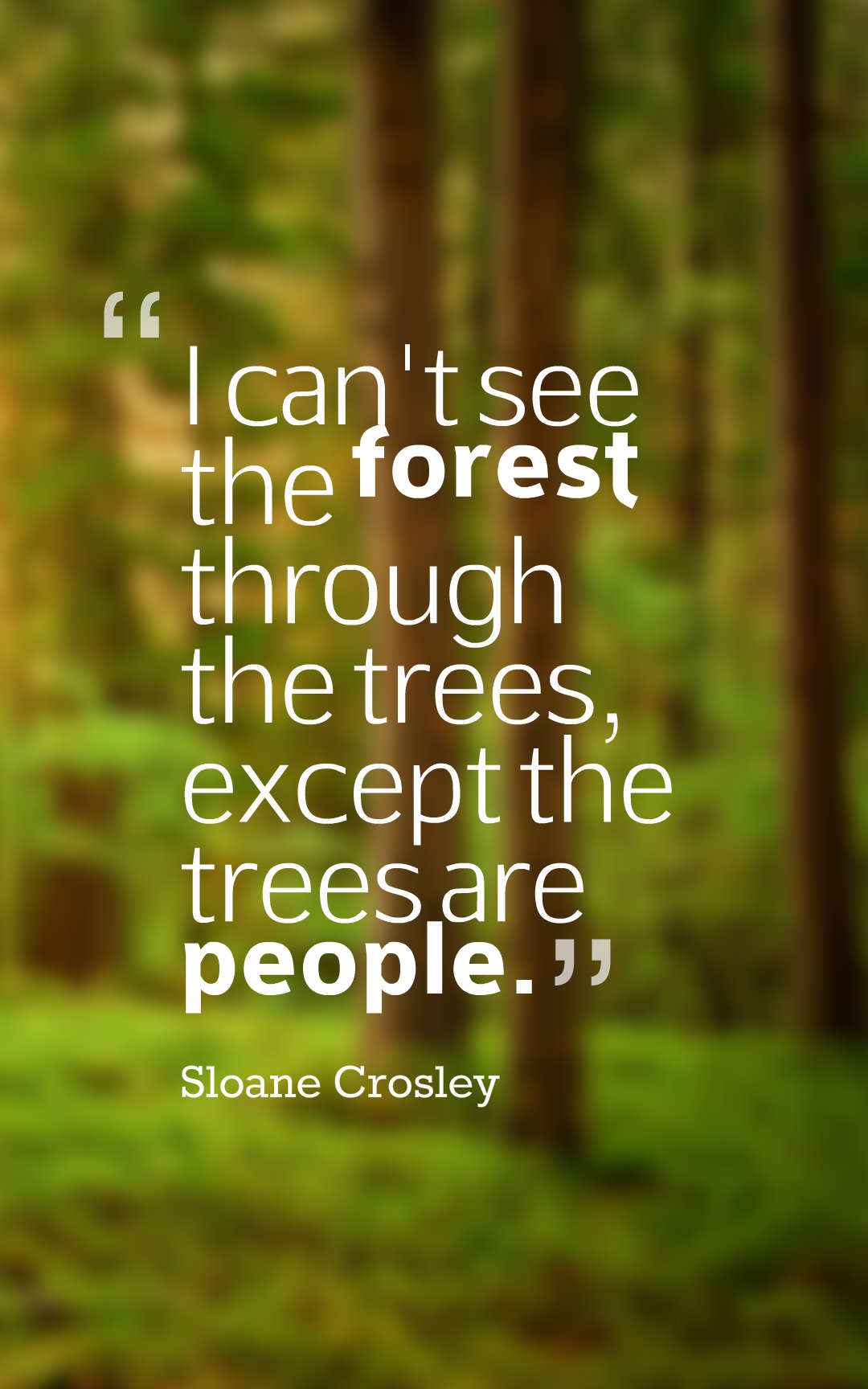 “A nation that destroys its soils destroys itself. Forests are the lungs of our land, purifying the air and giving fresh strength to our people.” — Franklin D. Roosevelt

“A forest is not a wilderness, but a community of souls who speak to one another on the wind.” — Anthony T. Hincks

“The death of the forest is the end of our life.” — Dorothy Stang 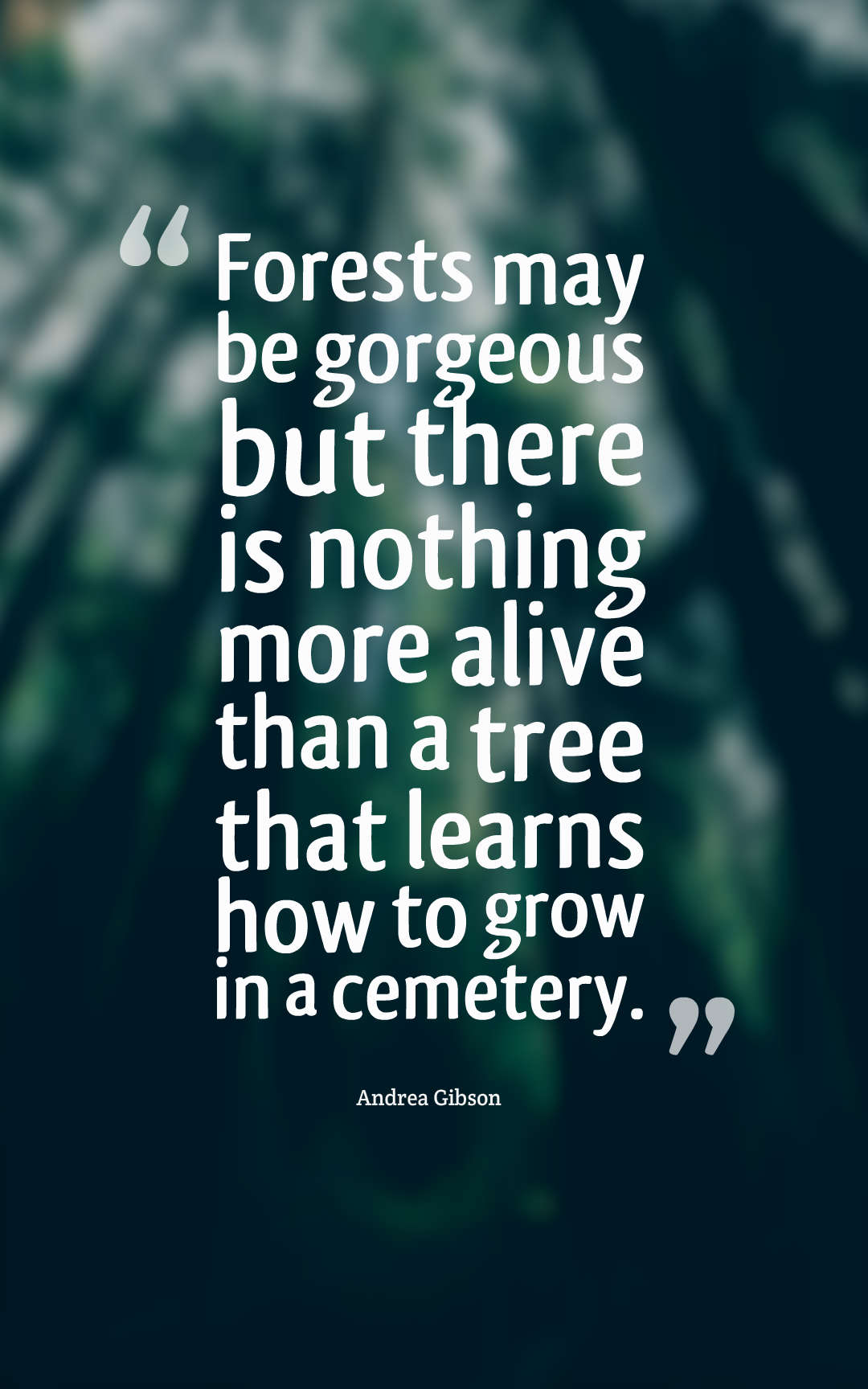 “And into the forest I go, to lose my mind and find my soul” — John Muir 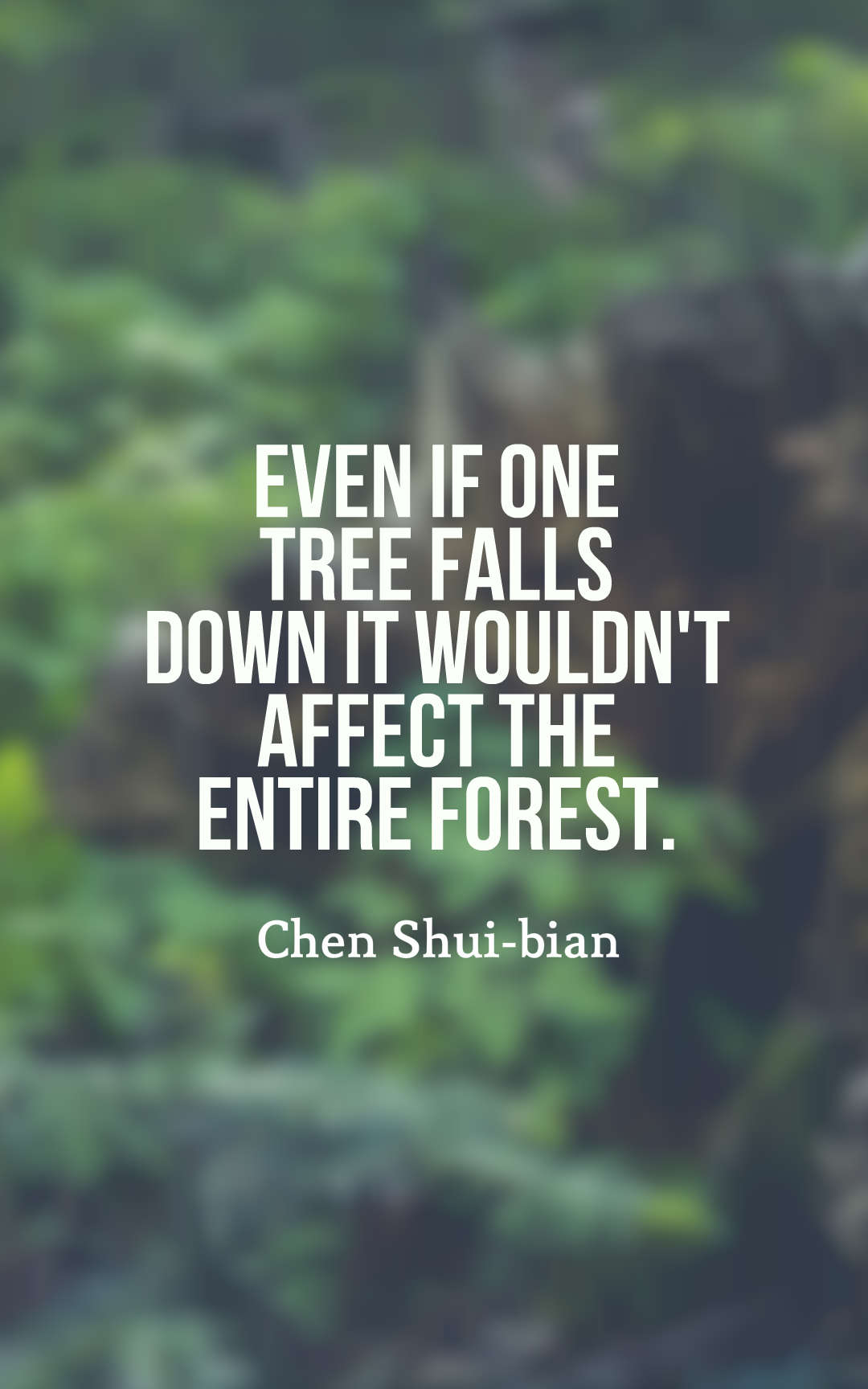 “Humanity is cutting down its forests, apparently oblivious to the fact that we may not be able to live without them.” — Isaac Asimov

“I can’t see the forest through the trees, except the trees are people.” — Sloane Crosley

“Come to the woods, for here is rest. There is no repose like that of the green deep woods. Sleep in forgetfulness of all ill.” — John Muir 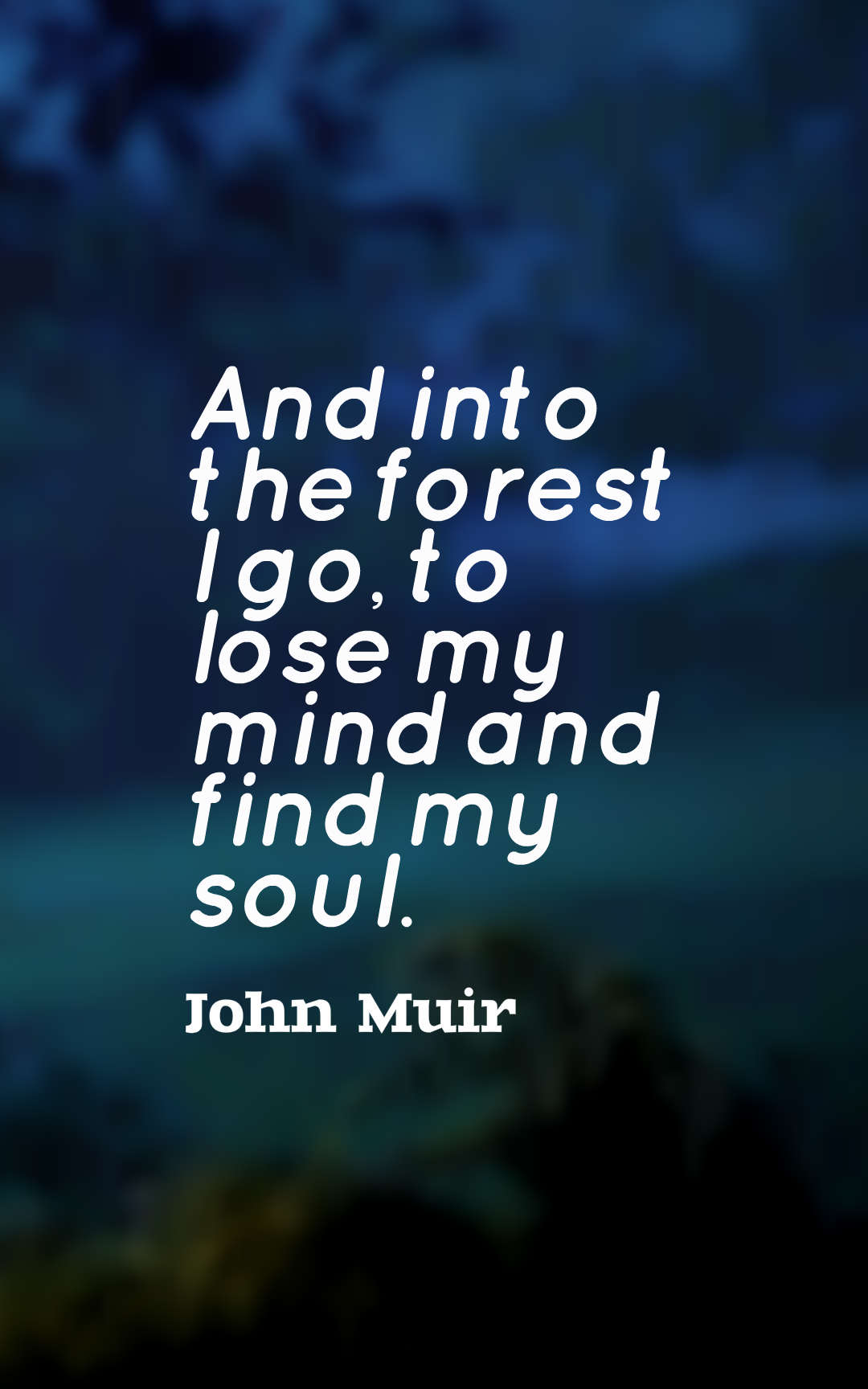 “For in the true nature of things, if we rightly consider, every green tree is far more glorious than if it were made of gold and silver.” — Martin Luther

“Tree is a soldier, forest is an army! And let us wish that all the battles against this army is lost!” — Mehmet Murat ildan

“The best time to plant a tree was 20 years ago. The next best time is now.” — Chinese Proverb 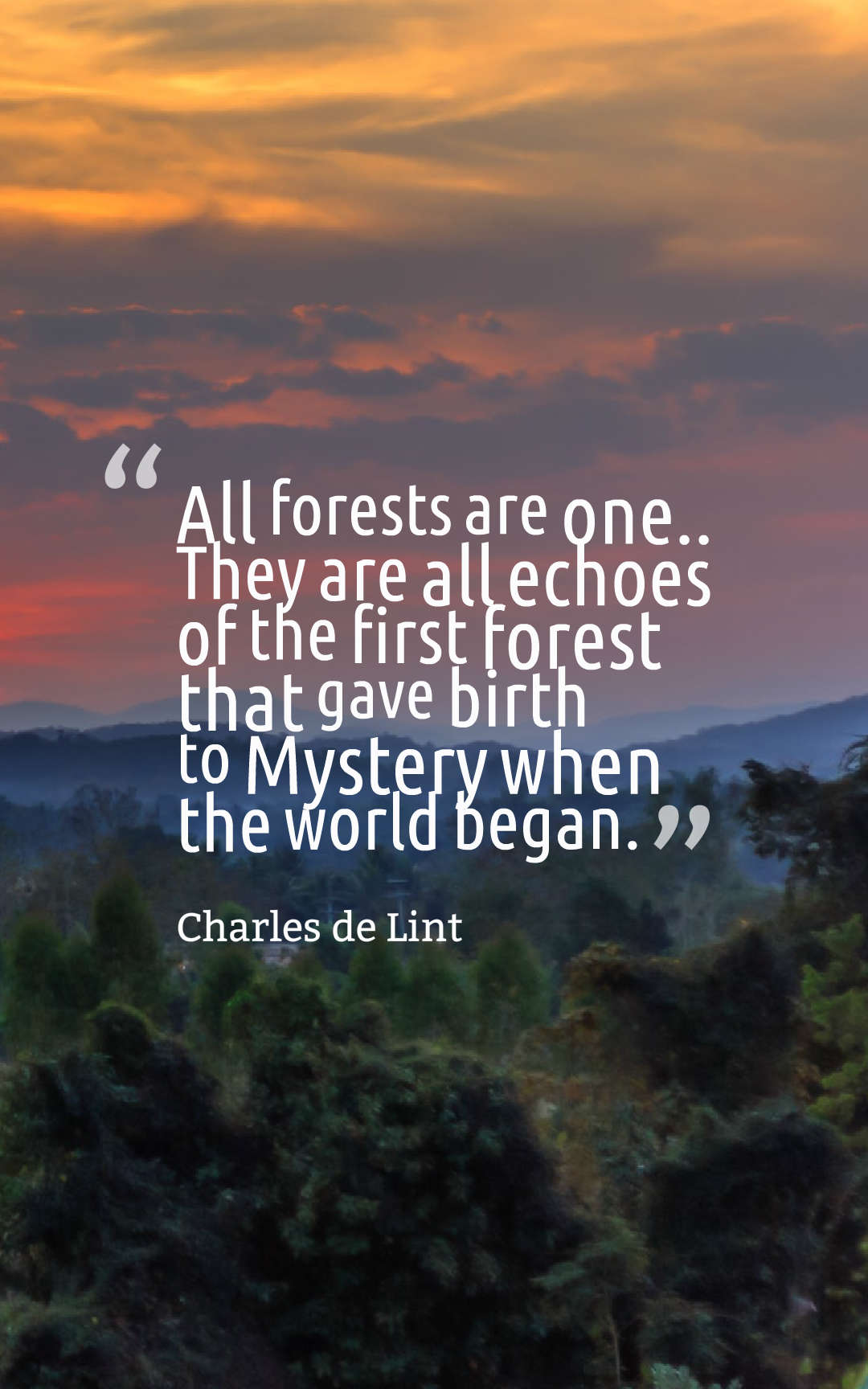 “Some of the best advice you will ever hear will come from the forest.” — Dacha Avelin 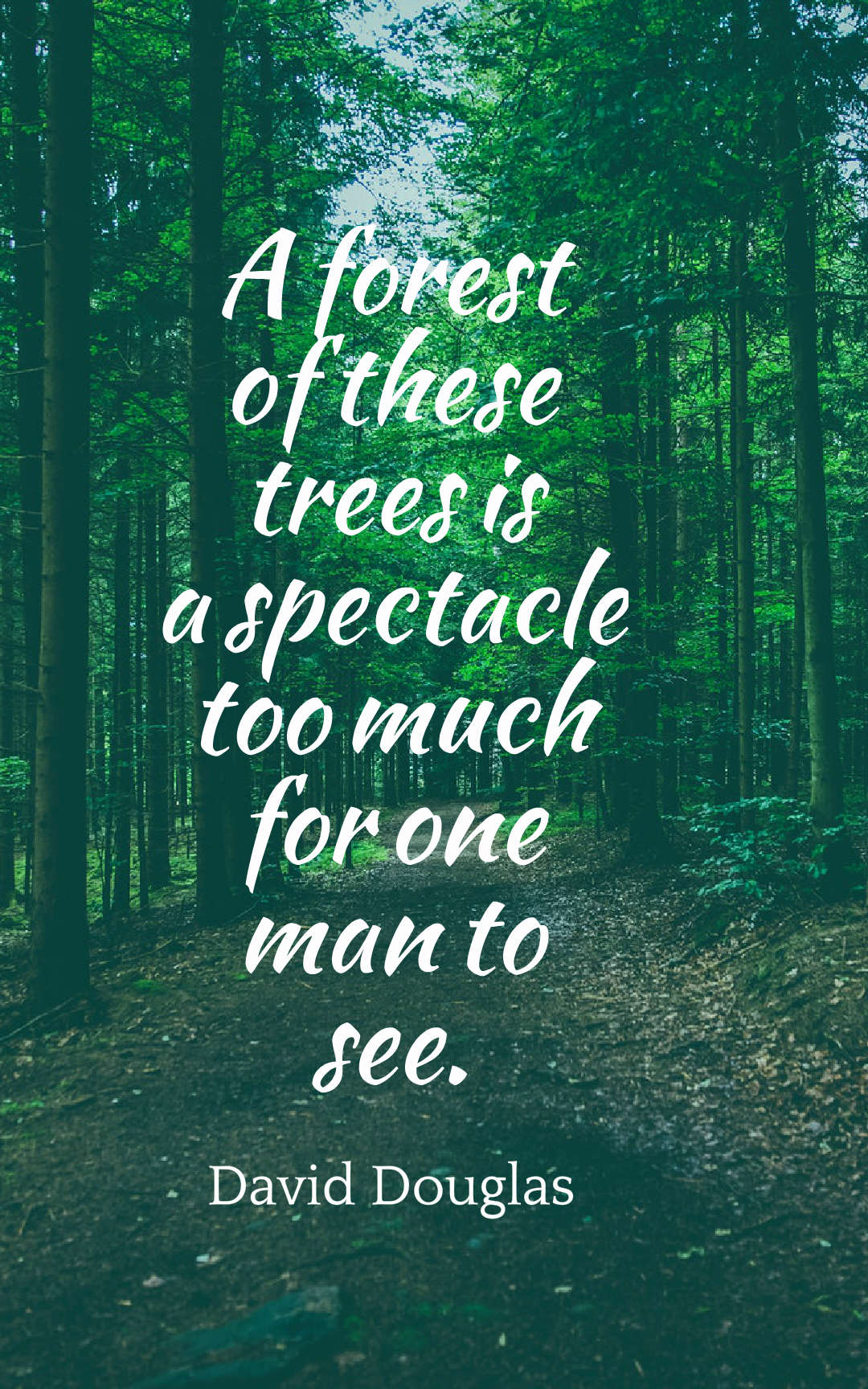 “The heart of another is a dark forest.” — Gloria Vanderbilt

“The path of sound credence is through the thick forest of skepticism.” — George Jean Nathan

“If you tell a joke in the forest, but nobody laughs, was it a joke?” — Steven Wright

“Chimpanzees, gorillas, orangutans have been living for hundreds of thousands of years in their forest, living fantastic lives, never overpopulating, never destroying the forest. I would say that they have been in a way more successful than us as far as being in harmony with the environment.” — Jane Goodall

“Climate change is the greatest threat to humanity, perhaps ever. Global temperatures are rising at an unprecedented rate, causing drought and forest fires and impacting human health.” — Cary Kennedy

“f the tongue had not been framed for articulation, man would still be a beast in the forest.” — Ralph Waldo Emerson

“The career of a sage is of two kinds: He is either honored by all in the world, Like a flower waving its head, Or else he disappears into the silent forest.” — Lao Tzu

“The more I see of deer, the more I admire them as mountaineers. They make their way into the heart of the roughest solitudes with smooth reserve of strength, through dense belts of brush and forest encumbered with fallen trees and boulder piles, across canons, roaring streams, and snow-fields, ever showing forth beauty and courage.” — John Muir

“The making of the far-famed New York Central Park was opposed by even good men, with misguided pluck, perseverance, and ingenuity, but straight right won its way, and now that park is appreciated. So we confidently believe it will be with our great national parks and forest reservations.” — John Muir

“No traveler, whether a tree lover or not, will ever forget his first walk in a sugar-pine forest. The majestic crowns approaching one another make a glorious canopy, through the feathery arches of which the sunbeams pour, silvering the needles and gilding the stately columns and the ground into a scene of enchantment.” — John Muir

“All of the Vines that were acted & setup & had nice cameras, those weren’t the good Vines. The good Vines were, like, a random little kid in the middle of a forest, like, yelling.” — Billie Eilish

“I thought my life was mapped out. Research, living in the forest, teaching and writing. But in ’86 I went to a conference and realised the chimpanzees were disappearing. I had worldwide recognition and a gift of communication. I had to use them.” — Jane Goodall

“In Tanzania, the chimps are isolated in a very tiny patch of forest. I flew over it 13 years ago and realized that, basically, all the trees had gone, that people all around the park are struggling to survive. It became very clear that there was no way to protect the chimps while the people were in this dire circumstance.” — Jane Goodall

“From my perspective, I absolutely believe in a greater spiritual power, far greater than I am, from which I have derived strength in moments of sadness or fear. That’s what I believe, and it was very, very strong in the forest.” — Jane Goodall

“I got to Africa. I got the opportunity to go and learn, not about any animal, but chimpanzees. I was living in my dream world, the forest in Gombe National Park in Tanzania. It was Tanganyika when I began.” — Jane Goodall

“But I’ll tell you what hermits realize. If you go off into a far, far forest and get very quiet, you’ll come to understand that you’re connected with everything.” — Alan Watts

“Votes are like trees, if you are trying to build a forest. If you have more trees than you have forests, then at that point the pollsters will probably say you will win.” — Dan Quayle

Hopefully you will enjoy these intense and cute collection of inspiring Forest quotes and sayings. please don’t forget to share these quotes.