Life is not useless because life has aims and everyone of us should struggle and strive for ambition to take any place in life ambitions of life is hope because these ambitions gives spirit to your thinking and desperate us to go towards in the way of dreams so read these amazing handpicked ambition quotes and get a road map to full fill your ambitions.

Ambition are fireflies which are continuously zeal you and whisper’s that you are able to do any thing to compete for your aims and ambition to became successful.

following are the collection of inspirational ambition quotes and sayings with images.

“Women who seek to be equal with men lack ambition.” — Timothy Leary

“Character cannot be developed in ease and quiet. Only through experience of trial and suffering can the soul be strengthened, ambition inspired, and success achieved.” — Helen Keller

“Our ambition should be to rule ourselves, the true kingdom for each one of us; and true progress is to know more, and be more, and to do more.” — Oscar Wilde

“Intelligence without ambition is a bird without wings.” — Salvador Dali

“Ambition is a good servant but a bad master.” — Unknown

“Keep away from those who try to belittle your ambitions. Small people always do that, but the really great make you believe that you too can become great.” — Mark Twain 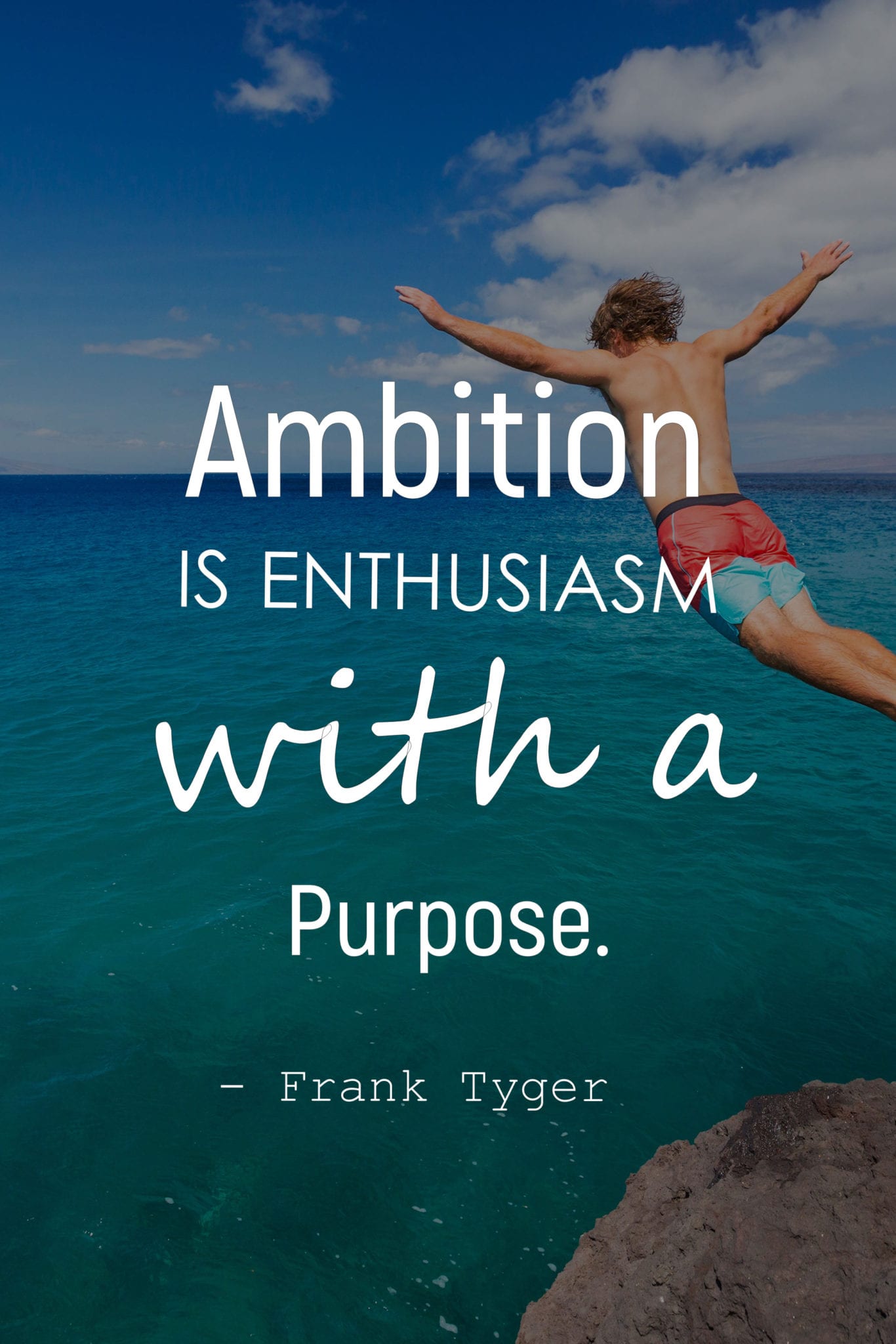 “A dream without ambition is like a car without gas… you’re not going anywhere.” — Sean Hampton

“Ambition is all very well, my lad, but you must cloak it.” — Jonathan Stroud

“Great ambition is the passion of a great character. Those endowed with it may perform very good or very bad acts. All depends on the principles which direct them.” — Napoleon Bonaparte

“Ah, but a man’s reach should exceed his grasp, Or what’s a heaven for?” — Robert Browning

“Ambition is the germ from which all growth of nobleness proceeds.” — Ralph Waldo Emerson

“Ambition is the path to success. Persistence is the vehicle you arrive in.” — Bill Bradley

“My personal ambition remains the same – to be creative, to be modern, to stay one step ahead, to enjoy life.” — Natalie Massenet

“My ambition is handicapped by laziness” — Charles Bukowski

“Ambition is like love, impatient both of delays and rivals.” — John Denham

“It has been a long journey, but if you dream and have the ambition and want to work hard, then you can achieve.” — Mo Farah

“Take away ambition and vanity, and where will be your heroes and patriots?” — Seneca the Younger

“Ambition is not what man does… but what man would do.” — Robert Browning

“Ambition is a lust that is never quenched, but grows more inflamed and madder by enjoyment.” — Thomas Otway 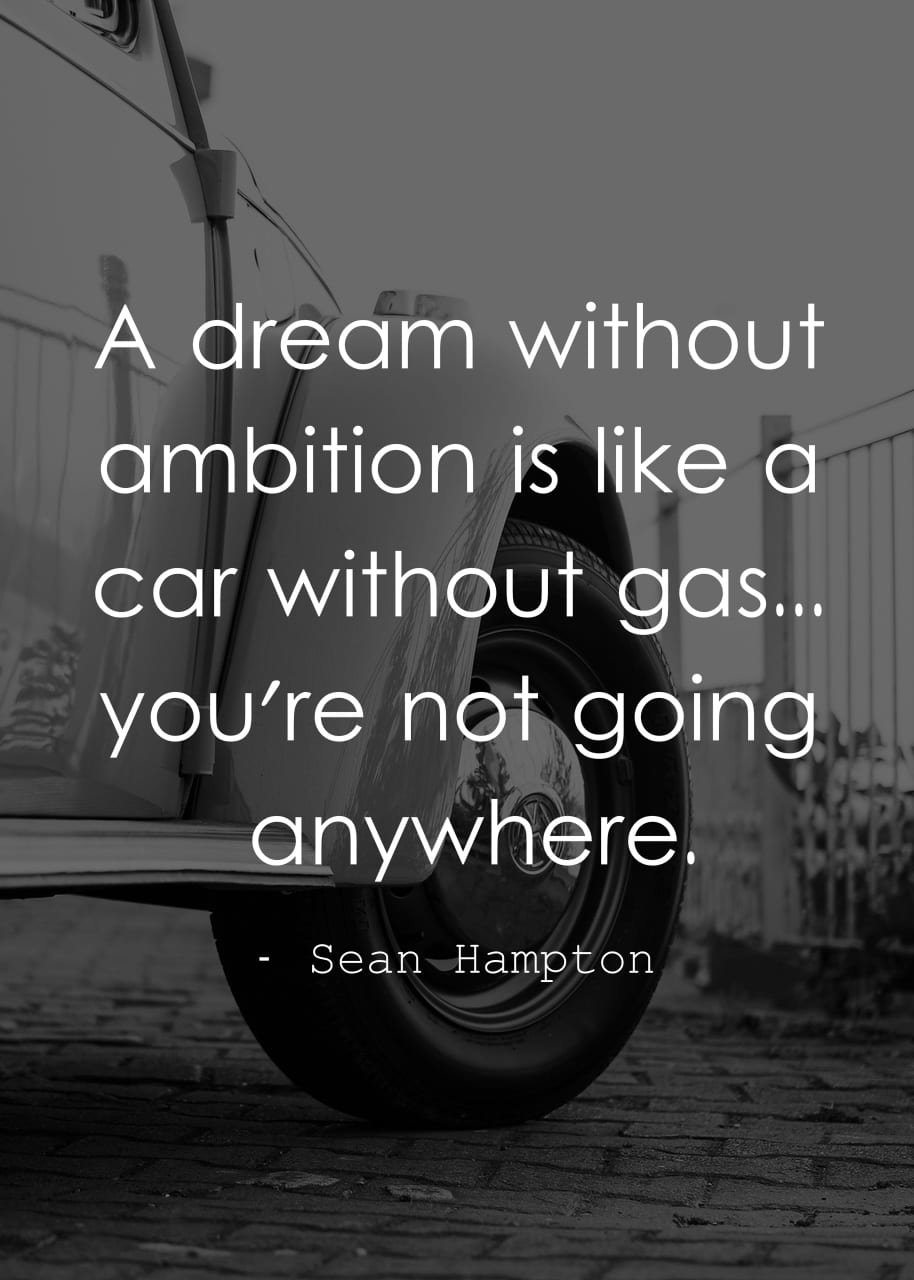 “Anxiety is the handmaiden of contemporary ambition.” — Alain de Botton

“To be happy at home is the ultimate result of all ambition.” — Samuel Johnson

“To reach the height of our ambition is like trying to reach the rainbow; as we advance it recedes.” — Edmund Burke

“I would rather be a little nobody, then to be a evil somebody.” — Abraham Lincoln

“A man’s worth is no greater than his ambitions.” — Marcus Aurelius

“A man without ambition is like a beautiful worm–it can creep, but it cannot fly.” — Henry Ward Beecher 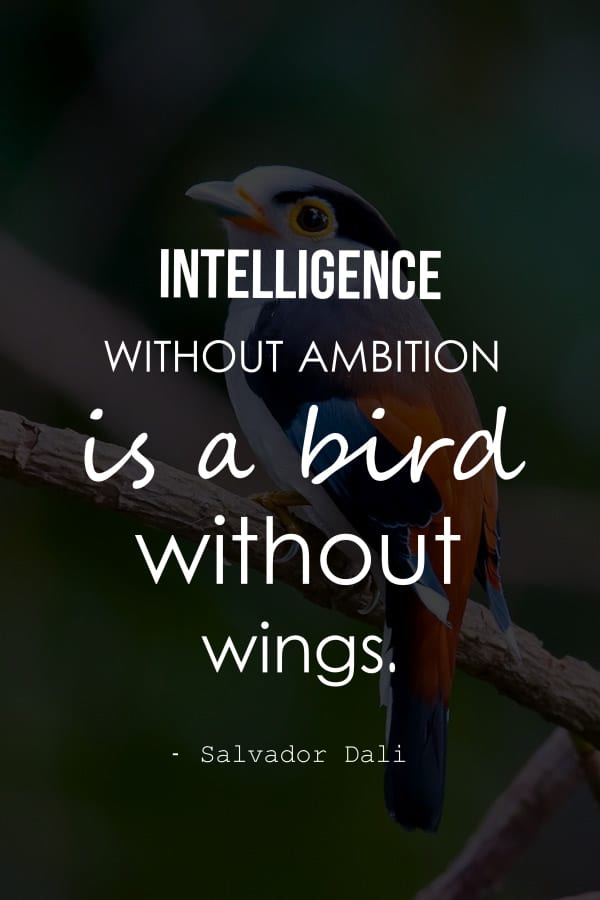 “The man who starts out simply with the idea of getting rich won’t succeed, you must have a larger ambition.” — John D Rockefeller

“People with ambition don’t give a damn what other people think of them.” — Diane Setterfield

“Ambition is a dream with a V8 engine.” — Elvis Presley

“Ambition is an idol, on whose wings great minds are carried only to extreme, to be sublimely great, or to be nothing.” — Thomas Southerne

“A man’s worth is no greater than the worth of his ambitions.” — Marcus Aurelius

“If you are calm about your ambitions, you become confident of achieving what you set out to do.” — Shiv Nadar

“Ambition has one heel nailed in well, though she stretch her fingers to touch the heavens.” — William Lilly

“Ambition is a Dead Sea fruit, and the greatest peril to the soul is that one is likely to get precisely what he is seeking.” — Edward Dahlberg 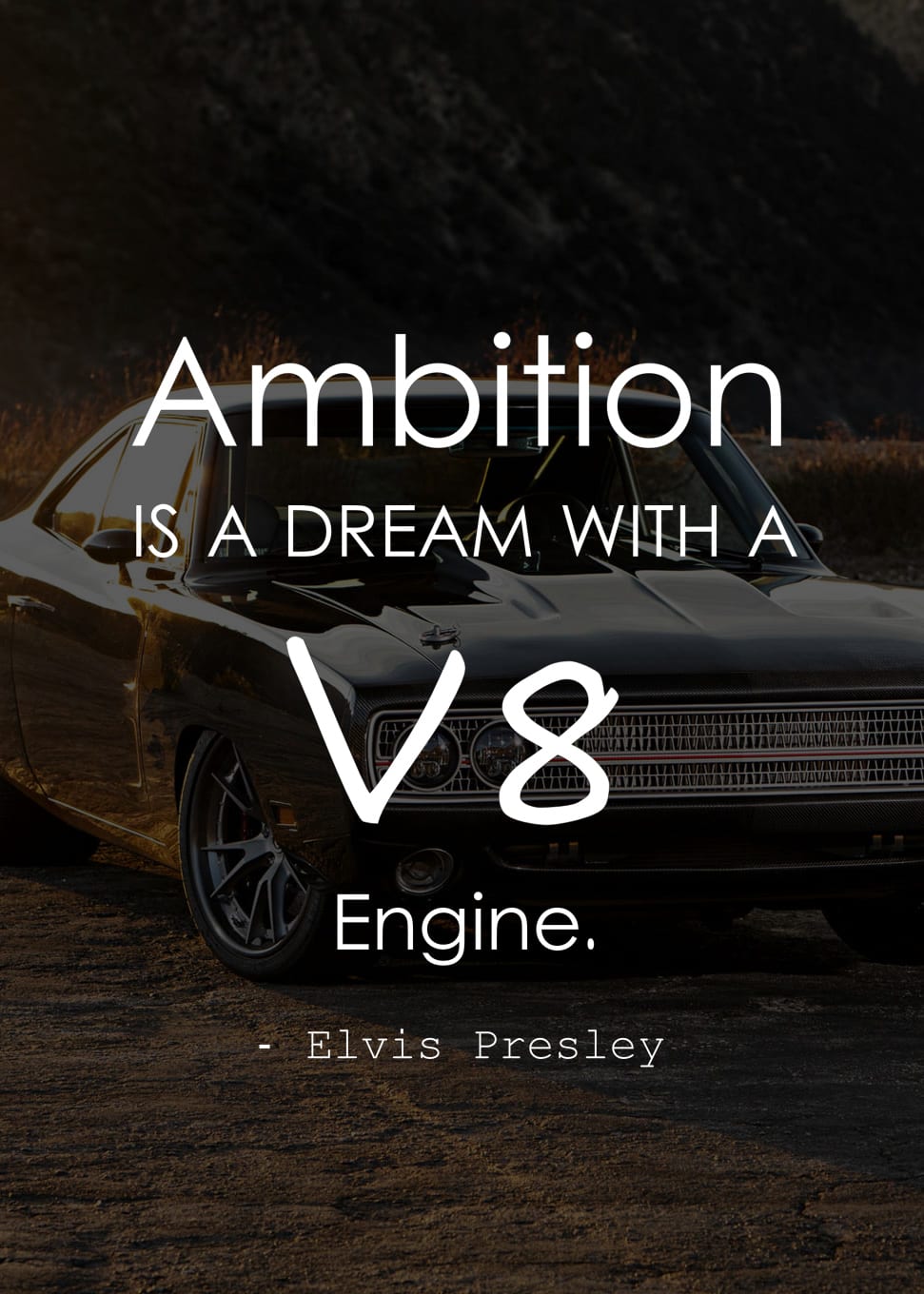 “Ambition is not what a man would do, but what a man does, for ambition without action is fantasy.” — Bryant McGill

“Ambition must be made to counteract ambition.” — James Madison

“Where ambition can cover its enterprises, even to the person himself, under the appearance of principle, it is the most incurable and inflexible of passions.” — David Hume

“Ambition is not a dirty word. Piss on compromise. Go for the throat.” — Steven Erikson

“Where there are large powers with little ambition… nature may be said to have fallen short of her purposes.” — Henry Taylor

“Ambition is putting a ladder against the sky.” — Anonymous

“Happiness never made anyone rich or famous. That must be why ambitious people avoid it.” — Marty Rubin 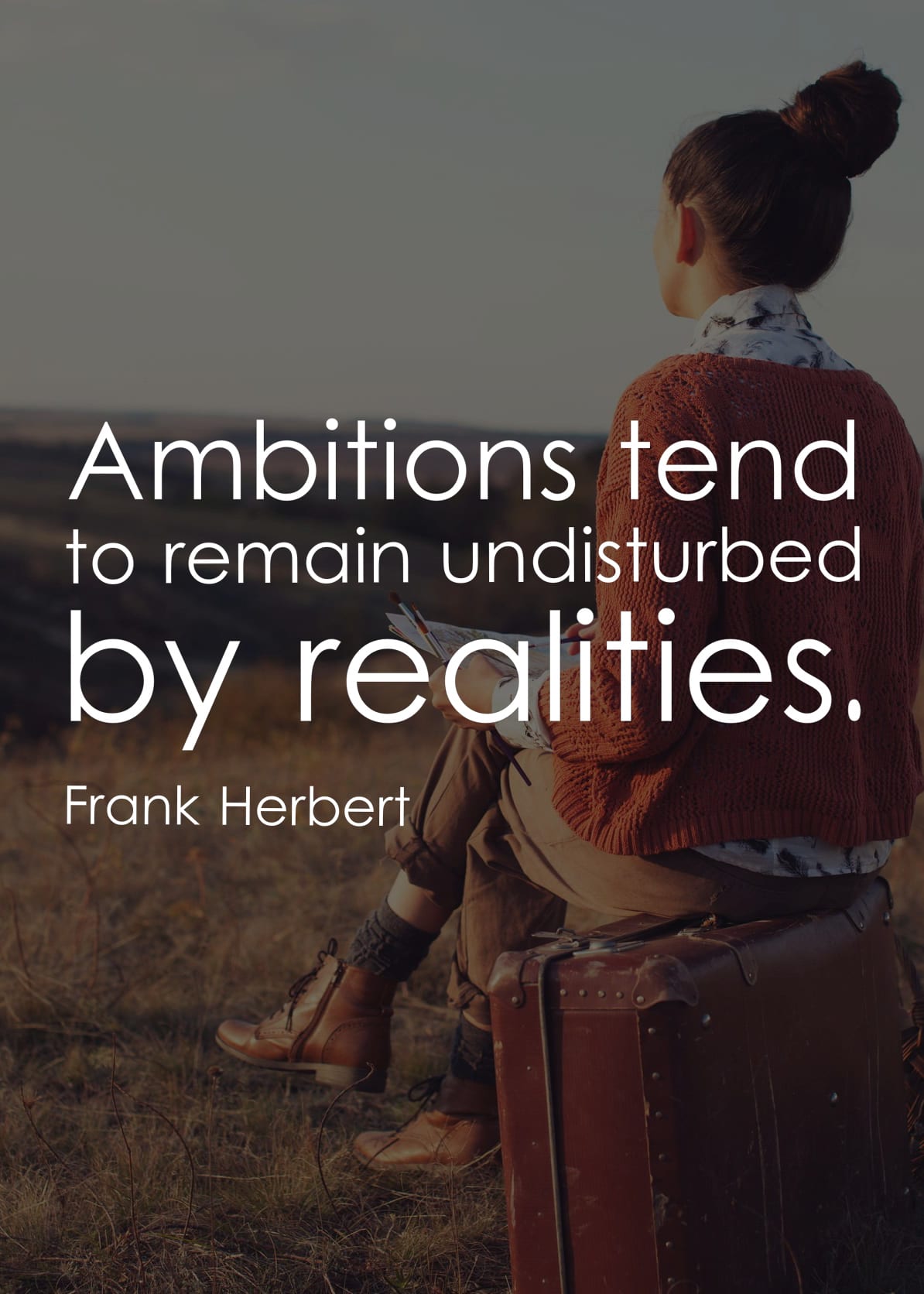 “The ambition and focus that propel you to success can also be your downfall.” — Judy Smith

“Ambition and the belly are the two worst counselors.” — German Proverb

“It occurred to me that the voracious ambition of humans is never sated by dreams coming true, because there is always the thought that everything might be done better and again.” — John Green

“My only ambition is to be true every moment I am living.” — Juliette Binoche

“The voracious ambition of humans is never sated by dreams coming true, because there is always the thought that everything might be done better and again.” — John Green

“Ambition can creep as well as soar.” — Edmund Burke

“The very substance of the ambitious is merely the shadow of a dream.” — William Shakespeare 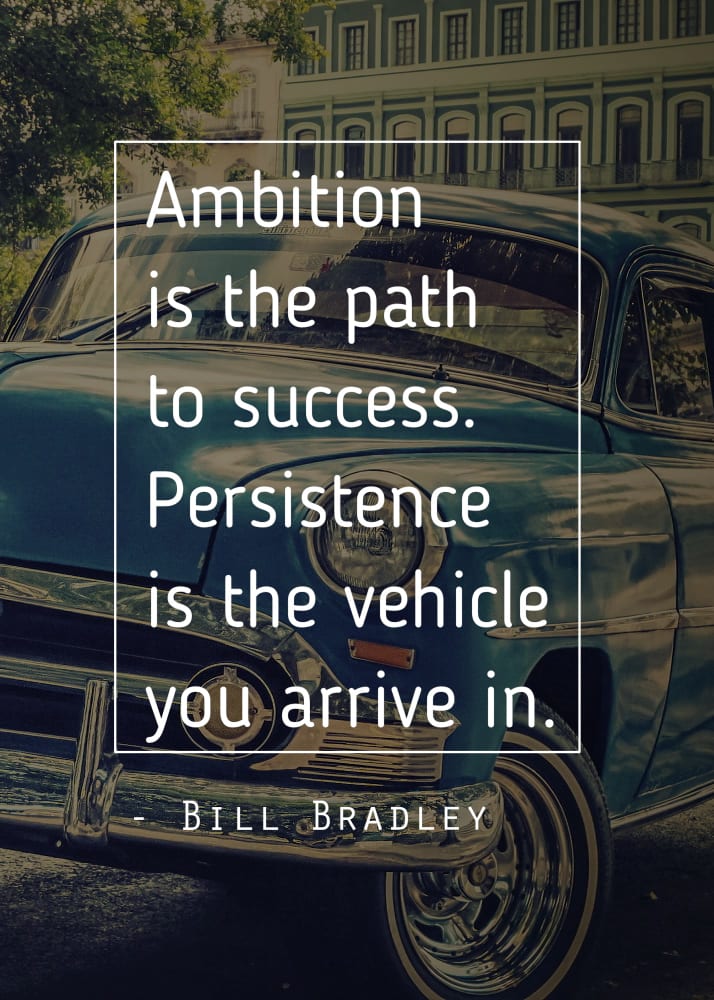 “Most people would succeed in small things if they were not troubled with great ambitions.” — Henry Wadsworth Longfellow

“Ambition is enthusiasm with a purpose.” — Frank Tyger

“Getting drunk with success and sick with ambition only leads to one route; destruction!” — Olawale Daniel

“The universe is not required to be in perfect harmony with human ambition.” — Carl Sagan

“It is a grand thing to rise in the world. The ambition to do so is the very salt of the earth. It is the parent of all enterprise, and the cause of all improvement.” — Anthony Trollope

“Those with less curiosity or ambition just mumble that God works in mysterious ways. I intend to catch him in the act.” — Damien Echols 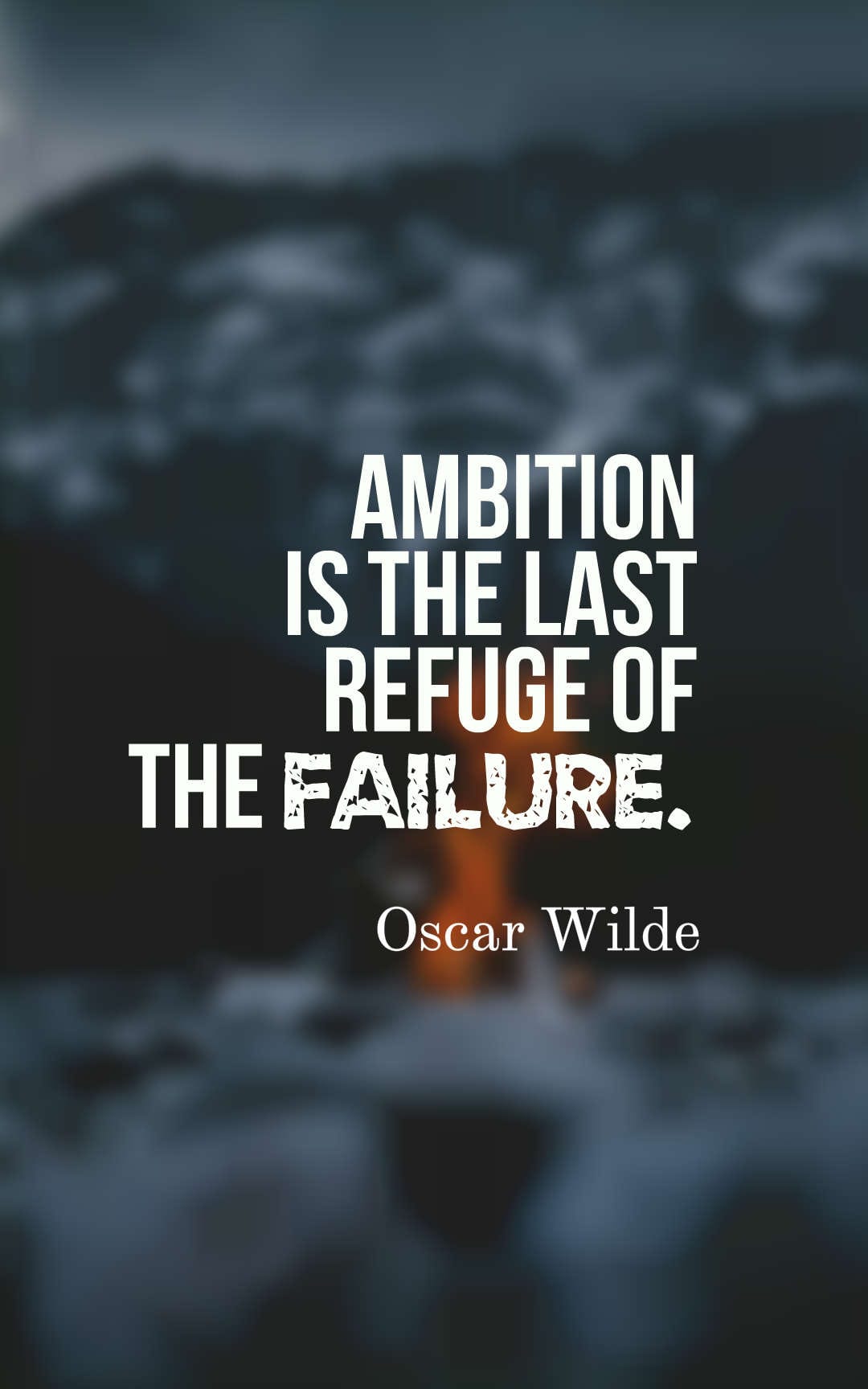 “When ambition exceeds ability, you are going to experience hardship. We have the choice to fear it or embrace it.” — Kevin Jorgenson

“Ambition is the last refuge of the failure.” — Oscar Wilde

“Don’t be afraid to be ambitious about your goals. Hard work never stops. Neither should your dreams.” — Dwayne Johnson

“The difference between greed and ambition is a greedy person desires things he isn’t prepared to work for.” — Habeeb Akande

“Talent helps, but it won’t take you as far as ambition.” — Paul Arden

“Without ambition one starts nothing. Without work one finishes nothing. The prize will not be sent to you. You have to win it.” — Ralph Waldo Emerson

“We cannot seek achievement for ourselves and forget about progress and prosperity for our community… Our ambitions must be broad enough to include the aspirations and needs of others, for their sakes and for our own.” — Cesar Chavez

“Focusing your life solely on making a buck shows a certain poverty of ambition. It asks too little of yourself. Because it’s only when you hitch your wagon to something larger than yourself that you realize your true potential.” — Barack Obama

“We need to steer clear of this poverty of ambition, where people want to drive fancy cars and wear nice clothes and live in nice apartments but don’t want to work hard to accomplish these things. Everyone should try to realize their full potential.” — Barack Obama

“Anybody with artistic ambitions is always trying to reconnect with the way they saw things as a child.” — Tim Burton

“At the age of 6, a teacher full of ambitions, who taught in the small public school of Biran, convinced my family that I should travel to Santiago de Cuba to accompany my older sister who would enter a highly prestigious convent school. Including me was a skill of that very teacher from the little school in Biran.” — Fidel Castro

“I wasn’t the typical pageant girl – I was a little more nerdy, and they gave me a voice. I created the Queen of the Universe pageant, which is charity-based, to benefit UNESCO. For me, the most important thing is that contestants have a charity-based platform or charity ambition.” — Joyce Giraud

“His ambition for victory sets Mourinho apart. He wants to win every game, so he prepares all the smallest details; in training, at the game, everything. I loved to work with him.” — Kaka

“Ambition leads me not only farther than any other man has been before me, but as far as I think it possible for man to go.” — James Cook

“Every man is said to have his peculiar ambition. Whether it be true or not, I can say, for one, that I have no other so great as that of being truly esteemed of my fellow-men, by rendering myself worthy of their esteem. How far I shall succeed in gratifying this ambition is yet to be developed.” — Abraham Lincoln

“It is my ambition to say in ten sentences what others say in a whole book.” — Friedrich Nietzsche

“Ambition should be made of sterner stuff.” — William Shakespeare

“A noble man compares and estimates himself by an idea which is higher than himself; and a mean man, by one lower than himself. The one produces aspiration; the other ambition, which is the way in which a vulgar man aspires.” — Marcus Aurelius

“Ambition is pitiless. Any merit that it cannot use it finds despicable.” — Eleanor Roosevelt

Hopefully you will enjoy these inspiring collection of Ambition quotes and sayings. please don’t forget to share these quotes.